3 reasons the Patriots defense will be better in 2016 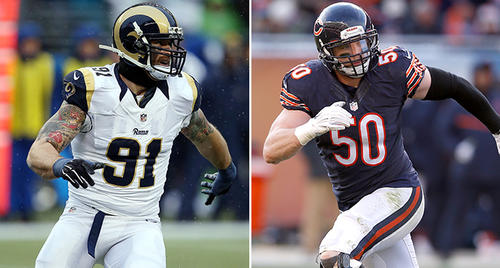 First off, let me preface this by saying I wholeheartedly believe that last year’s Patriots defense was a top 5 unit in the entire league.

Every position was filled with solid players with some great depth behind it, and the unit as a whole was kept, for the most part, healthy. Also, the team chemistry on D was phenomenal, with all of the players getting along with each other on and off the field and having virtually no problems in the locker room or with the coaching staff. With all of these parts flowing in working order, we saw tremendous results on the field and on the stat sheet. Now that I’ve said that, let’s dive into why this year’s defensive squad will outshine and outmatch last year’s unit.

With the exception of the Chandler Jones shocker that sent him to the desert of Arizona, the offseason was pretty much departure-free for the Patriots defense (we won't count Dominique Easley). Of course, losing our sack leader from 2015 is definitely a big blow, but when does Bill Belichick ever make a trade without having 4 more options lined up to replace that player? Never. Chandler Jones was a liability in terms of his contract and, out of the handful of players who will need a new contract very soon, he was the most interchangeable. Enter Jabaal Sheard. In Jones’ absence, this monster of a defensive end should step up in a huge way and maybe even earn himself a trip to the Pro Bowl in the process. In terms of the offseason additions of the Pats, lineman Chris Long and linebacker Shea McClellin were outstanding acquisitions for New England. Long still has some gas left in the tank along the defensive line and McClellin will now get a chance to shine a role he was not offered in Chicago.


2. A Defensive Based Draft

If there’s been one staple in the Patriots organization this century besides Tom Brady and Bill Belichick, it’s a draft focused on defense. Year in and year out, Belichick and the front office put a true emphasis on spending high draft picks on defensive players. While it’s not the sexiest route to take, it definitely has churned out some dominate players for the Pats (See Dont’a Hightower and Jamie Collins). This year was no different, as 4 defensive players were chosen within the first 6 picks, with the first of those picks being Alabama cornerback Cyrus Jones. This is a guy that can knock your head off and break your ankles on a punt return all within the matter of 5 seconds while playing some decent defense as well, and those are the types of qualities that Belichick loves in his players. Jones should be able to step in right away, providing great depth in a somewhat depleted group of cornerbacks. However, in choosing No. 24 he's got some very large shoes to fill. Other draft picks include: defensive tackle Vincent Valentine, who some believe could end up being the Pats best value pick in this draft class, and linebackers Kamu Grugier-Hill and Elandon Roberts. If this draft did anything, it gives the Patriots options at various positions on defense that they didn’t have available to them last year.


3. The Core is Still Intact

Now, while this might not be a change from last year’s team, it is one of the biggest reasons why the Patriots will only improve on the defensive side of the ball. The Core, including Jamie Collins, Dont’a Hightower, Malcolm Butler, and Devin McCourty, will be even hungrier this year than they ever were last year. With Chandler Jones being shipped off to Arizona and the Broncos showing them up badly last year in the AFC Title Game with a hobbled Peyton Manning at the helm, you can best believe that this group of players will be giving it everything they’ve got to reach another Super Bowl. Also, this hunger will rub off on guys like Chris Long and Shea McClellin who’ve never even been to the playoffs before. With any luck, the newly acquired Patriots will follow the Core’s lead and hopefully that’ll guide New England to yet another Super Bowl appearance.