Can the Pats step up their running game? 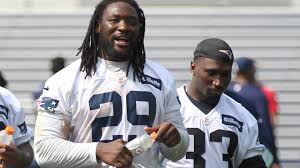 Last week the New England Patriots found out they will have to start the season without their leader Tom Brady.

As the four time Super Bowl champion decided to accept his four game suspension, coach Belichick will have to sit down and put together a game plan so his other players can step it up and produce.

Last year, the Patriots struggled with the run as they finished 30th in the league with 87 yards per game. Some of that had to do with injuries as the Pats o-line took some hits and so did their breakout running back Dion Lewis. On his way to a breakout season, Lewis went down with an ACL injury in week 9 against the Redskins.

Lewis had caught two touchdowns while running for two as he finished with 622 total yards before getting injured. Lewis looks to be on track to recovering, but the question is can he take on the load once the season starts?

Lewis played 66 percent of the snaps in the first five games of the season. Lewis who is 5-foot-8 195 pounds has been putting in great effort in coming back this season, but still you wonder is that a little too much to ask of from the undersized running back this upcoming season coming off an severe injury.

Legarrette Blount, who re-signed with the Pats this summer, finished with 165 carries for 703 yards and six touchdowns in 2015. However, he missed the last four games of the season and the playoffs with a hip injury suffered against the Texans in Week 12.

The good news is Blount's injury didn't require surgery, and when healthy, he is very productive as a power back for the Pats offense. Other running backs the Patriots can rely on are Brandon Bolden and James White. Their style of play is similar to Lewis as they excel in catching out of the backfield and making a one yard catch into 8 yards or more potentially. This helped the Pats when they struggled with their run game as they were able to still move the ball out the backfield.

The teams motto has always been "Do Your Job" and all the running backs will have to for the first four games of the season until Brady returns.