Jimmy Garoppolo sounds like he's ready to (temporarily) take the QB reins, has strong performance in first day of camp 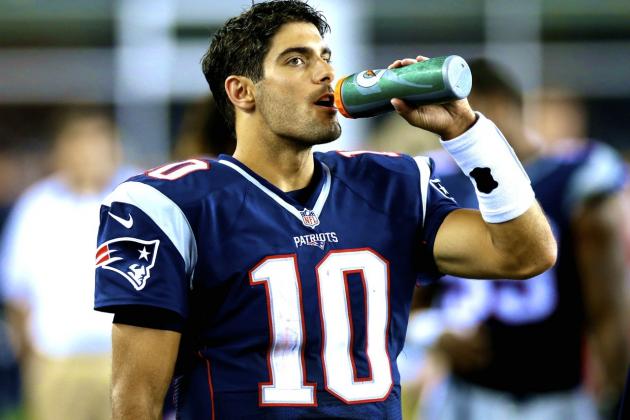 Patriots quarterback Jimmy Garoppolo seems like a pretty confident guy. The Eastern Illinois product will be under center for the Patriots' first four games of the regular season and he says he doesn't feel any different now than he did when he came to New England as a rookie two years ago.

“It’s tough to say,” Garoppolo said when asked how last summer’s uncertainty helped prepare him for this summer. “Like I said, rookie year I had the same mind-set. So however you want to look at it, I’ve been preparing to be the starter since the day I walked in here. Every competitor has that mind-set. It’s a good thing to have.”


What's more, Garoppolo says he's been preparing to fill Tom Brady's spot as the starting quarterback for quite some time.

"My mindset is basically the same. Rookie year, I had the same mindset. However you want to look at it, I've been preparing to be the starter since the day I walked in here."


That type of demeanor is the sort of thing that will go over well with Patriots fans. Although the idea of not seeing Brady for a little while will certainly feel weird, many believe the Patriots will be in good hands with Garoppolo.

Garoppolo knows that no matter how well he plays, his stay at the big boy table won't last too long. Yesterday, Bill Belichick confirmed the obvious: Brady will be the starter Week 5 in Cleveland no matter what.

Despite that, Garoppolo can use these four games as an audition for other NFL teams. Many believe Garoppolo is a starting-caliber quarterback in the NFL, and there is no doubt a handful of teams with quarterback issues will be checking in on him. Garoppolo has probably thought about that as well.

While we know Brady won't be in New England forever, Garoppolo likely isn't going to wait a long time to try and get a permanent starting job, which is why there should be extra motivation for him to play well for these four games.

“You don’t get many opportunities in this league,” he said. “You might only get one, so you better make the most of it.”


He seems to be making the most of his opportunity already. Per Doug Kyed of NESN, Garoppolo went 5 of 6 in 11-on-11 drills with the first-team offense, and 13 of 19 in overall team drills.