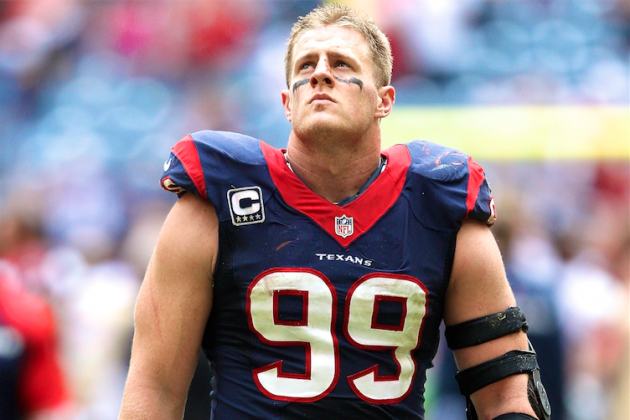 Now the dust has settled on the Deflategate saga for the moment, the Patriots have finally got some good news, in particular for Jimmy Garoppolo.

In one of the 4 games Tom Brady is suspended, the Patriots will be playing at home against the Houston Texans who now will most likely be without star defensive end J.J. Watt. This is due to reports coming out of the organisation last week that he has had back surgery and isn't a guarantee to start the season. Watt is a supreme athlete, one of a kind, but I feel even if he does make Week 3 at Gillette Stadium, he will struggle to be a threat due to his lack of match fitness. The back surgery has ruled him out of training camp and all 4 pre-season games and maybe even a few regular season matches.

The effect this will have on the Houston team will be huge because Watt is by far there best player and a leader on the field which will leave a big hole to fill. Although when the Patriots played the Texans last December and won 27-6, the defense nullified the threat of Watt. This was done through double teaming and looking to use his own aggression against him, which occasionally gave opportunities to others.

A player that capitalised on these opportunities in that game in December was Jadeveon Clowney, who will get to finally be the main man for Houston on defense. So far Clowney has had a very underwhelming start to his NFL career after being drafted 1st overall in the 2014 draft. He has been hampered by injuries but looks a shadow of the player we saw destroy teams in college. With Watt out potentially this could be the chance for Clowney needs to stamp his authority on the league.

We all know the Texans will be worse off without Watt on the field, but is this finally the chance for Clowney to shine?