Ray Rice will supposedly donate his 2016 salary if signed by a team... 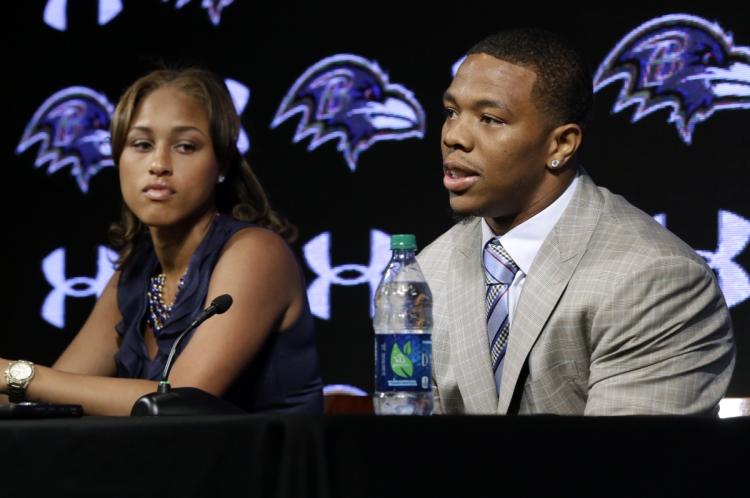 Rice and his then girlfriend, Janay Palmer at a press conference in 2014. Photo: NY Daily News


Well, that's a first. I mean has anyone ever heard of any professional sports player doing this? I've been doing research for the last 30 minutes and have not found one instance of a player donating their whole year's salary to charity. Either Rice has truly gone off the deep end, or he is 100% hell-bent on getting one more shot at competing in the NFL.

If you don't know, Ray Rice was involved in a huge scandal back in February of 2014 that went mega-viral. CNN, TMZ, and ESPN all had reporters covering Rice's every move, which doesn't happen too often. Long story short, Rice punched his wife in the face on an elevator in Atlantic City, knocking her unconscious, and then dragged her out of the elevator by her feet. Sick, scummy stuff. The video footage of this scene (the dragging part only) was playing across every news station by the next week after TMZ got ahold of it, and Rice was eventually let go by the Ravens and got indefinitely suspended by Roger Goodell months later after the full video footage was released (Rice only got a 2-game suspension before he was indefinitely suspended, but Brady gets 4, funny right?). The former Raven has been pleading desperately to every NFL team for another chance after his suspension was lifted, but so far, no team has taken the bait due to the sheer amount of drama that comes with inking him to a contract. Before this incident occurred, Rice was largely considered one of the best backs in the league, consistently rushing for over 1,000 yards and torching the Patriots many times. Many of you might remember the 2009 playoffs when Rice rushed for an 83-yard touchdown on the first play from scrimmage, but I'd rather not think about it as the memory still burns a hole in my brain.

So, the ultimate question is, should an NFL team give Rice a chance? In my humble opinion, yes. I know what he did was one of the worst things he could possibly do, hitting your wife should land a person in jail for a long time, but here Rice is, ready to donate his entire salary if signed by a team for the 2016 season. Why not give him a shot? Am I saying the Patriots should sign him? No, because I don't think they need all the drama that comes with signing him after this newsworthy offseason and because he's been out of the game for so long. But a team like the Cowboys (who are always signing delinquents, see Greg Hardy) or the Browns, who could use any spark they can get their last place hands on, might be potential fits for the former Pro Bowler. Ray Rice, for all I know, could still be a productive back in the NFL, but what comes with him is a plethora of drama and bad press, which is more than likely what is holding teams back from signing him or at least bringing him for a workout. However, for a team who has nothing to lose, he wouldn't be a terrible guy to usher into training camp just to see what he can still do.

In a side note, a really mean, or brilliant depending on how you look at it, thing a team could do is sign Rice and just plant him on the practice squad for the season just to get the money to charity. But I highly doubt something along those lines does actually happen.