Mixed off-season for the Jets 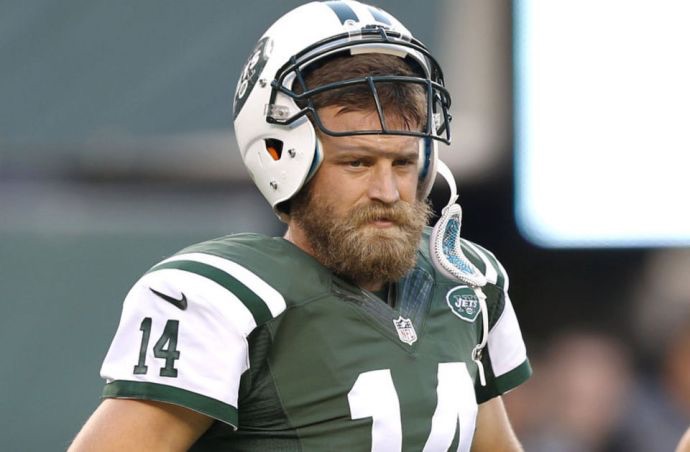 If you think of the New York Jets this off-season, two stories spring to mind straight away. One is Muhammad Wilkerson signing a new 5-year deal which is huge for the defense. The other is the stalemate between the New York Jets and Ryan Fitzpatrick.

Quarterback:
There is only one place you can start, with Ryan Fitzpatrick who to be honest has been a journeyman, most of his career since being drafted by the Rams. He has put on the uniform of the Bengals, Bills, Titans and Texans before seemingly finding a home at the New York Jets last season. For the first time he looked comfortable in an offense, with big time weapons around him, like Brandon Marshall, Eric Decker and Chris Ivory. Furthermore this is the first time since Mark Sanchez (well we all know what happened to him 'butt fumble') that the Jets have had a QB that does the job and he almost got them to the playoffs last season with an 11-5 record.

Now here comes the problem, Fitzpatrick is 33 years of age, he hasn't got much more time in the league, so at the moment for the Jets he is a short term solution, but Fitzpatrick wants the contract he feels he deserves. This stellar QB for the New York Jets last season wants to get paid because he knows in his mind this could be his last contract. There's the problem, Fitzpatrick wants big money but the Jets aren't willing to pay it!

In my opinion this is a bad move stringing this out so long because we are just about to start camps, and this will cause uncertainty throughout the organisation.

The Jets should've wrapped this up ages ago with a two or three year deal. Now they are running the risk of having to play either Geno Smith, Bryce Petty or Christian Hackenberg at home against the Bengals on Sept 11 and every New England fan wants to see that.

Running Back:
This is when the positive news starts for the Jets which is not what we want to hear as Patriots fans. Todd Bowles has done incredibly well to bring in Matt Forte.

The Jets lost a pivotal part of their offense, Chris Ivory, to the Jacksonsillve Jaguars and had to replace him with someone who was going to be as effective. In my opinion I feel like in Matt Forte they have got someone who is more of a weapon because Ivory is more of a downhill runner, in comparison to Forte who is more versatile. He is your complete running back who can block, run between the tackles and open space, as well as being able to turn into a receiver if necessary. Signed on a 3 year deal for $12 million from the Chicago Bears it is a great deal for both parties, as the Jets got a great player on the cheap and Forte joined a legitimate playoff hopeful team.

Defense:
The key deal for the defense of the New York Jets was signing Muhammad Wilkerson to a 5 year deal last week worth $86 million as he is such a cornerstone for the unit as a leader and as a player. Wilkerson is a player who leads by example and is arguably the best player on one of the top 5 defenses in the league. With his ability to strike fear into opposing quarterbacks, he has a rare talent that only a select few have such as J.J. Watt and Justin Houston.

If you then combine this kind of destructive player with Sheldon Richardson, who will miss their opener against the Bengals due to suspension, and Leonard Williams who was much regarded as the best player coming out of the 2015 draft, you have a terrifying trio there. Also on top of that being able to keep Darrelle Revis locked down for another year, as he normally contests free agency every season, the Jets are looking as dangerous as ever.

As a Patriots fan you probably would be worried with all the success the Jets have had this off-season, don't be so downhearted this early. They haven't played a game yet. They might have a good defense and weapons on offense but without a sturdy situation at quarterback I can't see them reaching that 11-5 record of 2015 or better this season.