"Tom will return as the starting quarterback when he comes back, but in the meantime we have to prioritize the first part of our schedule, and that’ll be to get Jimmy ready to go. That’s pretty much where we are for today. It’ll be a day-by-day, step-by-step process." (USA Today)
Belichick had some other comments, mostly in typical Belichick fashion. “We have a good situation,” “we’ll just see how it plays out,” things like that. The above quote however, is very telling. 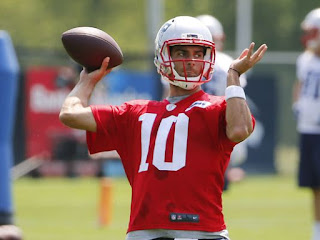 No one, Patriots fan or not, will forget the (rather sad) story of Drew Bledsoe. Bledsoe, of course, was New England’s franchise quarterback, and in 2001 he was in the prime of his career. Bledsoe was entering his eighth pro season, had already been to one Super Bowl, and appeared to have his job locked up. He then suffered a horrendous injury, and Tom Brady stepped in, and we all know what happened next.

The above quote from Bill Belichick is his promise to Patriots fans that a Bledsoe-situation will not happen again. Any self-respecting New England fan knows how outlandish this notion is. Fans outside of New England, though? Not so much. They look at the departures of players like Ty Law, Lawyer Malloy, Aquib Talib and most recently Darrelle Revis. Some of these people believe the same thing will happen with Tom Brady. That would never happen. Tom Brady is the greatest quarterback of all time, and Belichick told fans he will be New England’s quarterback regardless of Garoppolo’s success. 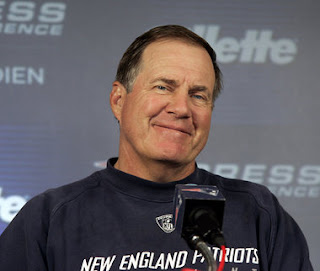 It will be interesting, though, to see what actually happens. If New England is 4-0 and Jimmy Garoppolo has thrown eight touchdowns and zero interceptions, would BB pull the young QB? I think he would.

Thanks to USA Today and blog.massive.com for the photos.