Why LeGarrette Blount isn't a lock to make the roster

As training camp approaches, possibly the biggest question mark for the Patriots is their running back situation. Currently, there are 8 players competing for 4, maybe 5 roster spots at the position. At the moment, Dion Lewis is the clear number one option and the only lock to make the roster. Behind Lewis, there is a lot of uncertainty in the backfield in New England. 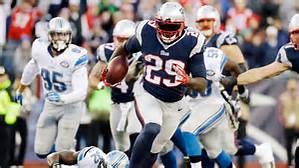 Looking at LeGarrette Blount's numbers from last season, it would seem he still has plenty in the tank. Despite missing week 1 last year due to suspension and a slow start in week 2 with only 2 carries for 4 yards, he still finished the season with 703 yards on 165 carries in 12 games. He averaged a respectable 4.26 yards per carry, in addition to rushing for 6 touchdowns and catching 1. Considering the shaky offensive line play that plagued the Patriots last year, those are pretty good numbers.

Returning to the Patriots on a team friendly one year deal, at first glance it would seem like a certainty Blount would be the clear number two running back on the depth chart. Given that the Patriots injury ravaged rushing attack finished 30th in the NFL last season, the case for bringing him back would sound even more compelling. With seemingly no viable alternatives available in free agency, it would appear all signs are pointing to him making the team. So, why is his roster spot in jeopardy?

The big concern with Blount is his health. After going down in week 14 against the Texans last December with a hip injury that landed him on season ending IR, Blount is yet to return to the practice field. While that's no reason to panic, missing all of OTA's and mini-camp certainly isn't an encouraging sign. Running backs typically have a short shelf life in the NFL and most begin to decline quickly by age 30. At 29 years old and taking into account his punishing, physical style of play, the Patriots may be concerned Blount could be approaching the end of his playing days. Given that only $100,000 of his one year, $1,000,000 deal is guaranteed, it certainly seems like the Patriots are prepared for that possibility.

Despite his age and injury concerns, there is still plenty of hope that Blount will bounce back and have a productive season. Though he certainly isn't going to be getting 15-20 touches per week, Blount does bring an important dynamic to the Patriots offense. At 6'0" 250lbs, Blount is a big, bruising back that wears opposing defenses down in the fourth quarter. Taking into account that Tyler Gaffney, the only other "big back" on the roster has yet to see the field as a Patriot due to injury, Blount still has a pretty good shot at making the roster. In fact, Pro Football Focus actually ranked his contract in its top 5 best contracts at each position. PFF compares a players grades on their metrics with the grade on their cap hit and length of contract to determine its value.

Though Blount is far from a roster lock, his chances still look good due to his experience in the Patriots system and the apparent lack of other options. With Tom Brady suspended for the first four games of the season, the running back situation becomes that much more important. If Blount can return to form, that would be a huge boost for the Patriots offense in Brady's absence. I would expect Blount to make the roster if he's fully healthy, but at the moment, that's a very big if.