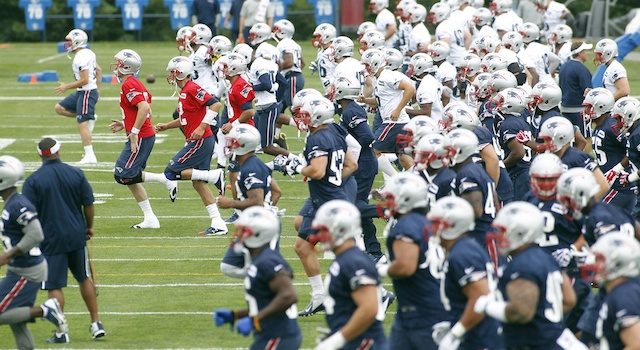 Normally when training camp comes around a lot of the hype train is centred around that football is back and the league's best players are back working out ready for the season. Most of the time the players further down the roster aren't talked about but credit Bill Belichick who has assembled an incredible 90 man roster.

The depth that Belichick has built up in this current roster isn't as if he has just thrown a few players in there, each player has quality and they are there for a reason because they earned it. Obviously, the Patriots have players that are considered to be the best in their position at quarterback, slot receivers, tight end, offensive tackle, linebacker, cornerback, safety and kicker, which expresses the amount of quality the Pats have. With this quality, it allows a real competition for places lower down the roster because outside of these positions, there is potential that a low profile player could force their way into the 53 man squad.

In previous seasons the Patriots are known for a bit of a revolving door policy during training camp, but to keep the current roster together this year and not make any changes so the team can get used to their surroundings is very clever. Doug Kyed of NESN compares this decision by Belichick to previous years:


1.5 weeks into camp #Patriots havent made a roster move. Telling, compared to past yrs:

A position on the roster I feel needs be strengthened before the trade deadline on November 1 is the running back position. We saw last season that after Dion Lewis went down injured the Patriots struggled to run the ball. This was evident in particular against the Broncos in the AFC Championship Game when Brady was hit many times and had no Plan B in terms of trying to use the running game. James White can't get yards on the ground, LeGarrette Blount wasn't good enough last year, Branden Bolden won't play more than special teams, Donald Brown is injured and the rest are unproven. If Lewis is out, there is no real fallback and so I would like to see the Pats do some business to get in another quality running back. The problem is who is out there?

You have to credit Bill Belichick for the way he has constructed this roster in not just quality but depth as well. If this is arguably the deepest and most talented roster the Patriots have had in a long time, considering we won the Super Bowl in 2014, surely the Pats should win it all this year.