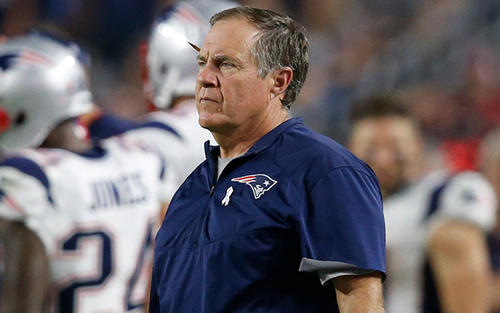 If there's one constant throughout every Patriots game, win or loss, big game or insignificant game, the one constant is Bill Belichick giving us and the media some witty and quote worthy responses to people's questions. Last night after a huge win in Arizona, was no different.

After a reporter asked him what he thought would be the main storyline the next day, Garoppolo's performance or the game plan to help the young QB, he responded in a way that only Bill Belichick can:

“Well I mean, I’m really really concerned about the storyline,” Belichick responded dryly back to the reporter. “There’s really nothing higher on my list than the storyline tomorrow... I can't wait to read it."

I'm not sure when the media will finally understand that Belichick won't give them the response they're looking for when they ask controversial or watered down questions. He will either respond with some sarcastic answer, like he did last night, or repeat himself over and over and over until he gets the go ahead from the Patriots PR guy to leave the podium, a place I bet he hates more than Metlife Stadium and Mile High Stadium rolled into one.

It's a new year, but the same, emotionless Belichick still resides on the sideline, and that also goes for his game management and play calling skills. No matter what you want to say about the game plan for Garoppolo, it got the job done and did a great job of easing Jimmy G into the game and the season for that matter. He used his timeouts very curiously, just like he did in Super Bowl 49, but in the end, he prevailed. I still haven't learned to trust Belichick implicitly yet, and every time I do question his methods and decisions, Bill is usually always right... What am I saying, he is always right. He's still a football genius, and he's still the same old Belichick, which is just the way New England likes him.