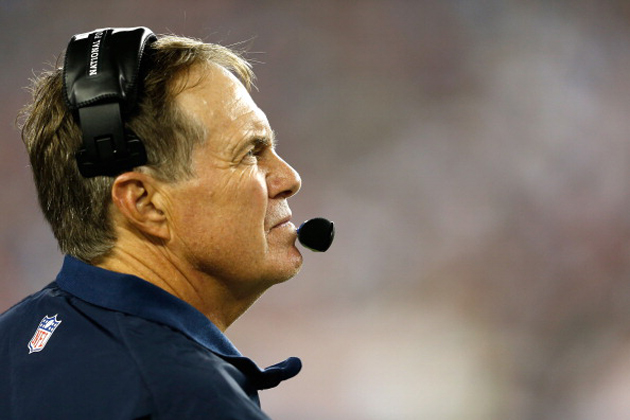 It always delights me to see how wrong some uneducated, anti-Patriot writers/analysts can actually be.  Every non-New England sap out there who has access to a computer and a newspaper or blog loves to hop on the "Evil Empire" bandwagon and try everything in their power to convince their readers that the demise of New England is imminent. You hear about it before the start of every season: "The three other AFC East teams signed some talented, solid players in the offseason and should have the opportunity to once and for all knock New England off their throne of tyranny." Ten times out of ten, as we've seen these past few years, these comments and predictions couldn't be further from the truth. Manish Mehta, of the New York Daily News (NYDN), is the latest victim in a long line of disproven writers to incorrectly predict how the AFC East will play out.

A couple years ago, former NFL quarterback Trent Dilfer (who happens to be one of the statistically worst QB's ever), made his famous comments about Tom Brady and the Patriots after the Monday Night Football debacle against Kansas City:


Oh how I so enjoy reading those comments two years later. Dilfer made the classic mistake of judging the Patriots too early on in the season and doubting the greatness of Bill Belichick. He's not the only "expert" to fall into this common trap however, as multiple ESPN and NFL employees have written slandering pieces on the Patriots just to get more traffic on their articles from football fans who love to hate on New England. Although, no one has does it more than Manish Mehta. Mehta works for the NYDN as a sports columnist focusing on the Jets but likes to dabble in Patriot criticism and outlandish predictions from time to time. For example, his prediction of the Chiefs-Jets game yesterday was 23-16 New York... the Jets were demolished 24-3 with Ryan Fitzpatrick tossing 6(!!) interceptions, the most in an NFL game since 2007 (Peyton Manning). That utterly incorrect prediction is just one of many but there's one that stands out more than the rest:

With Garoppolo out, the Jets will be in 1st place in AFC East by the time Tom Brady returns https://t.co/MrZW09VYlD pic.twitter.com/ezYqek2cPo
— Manish Mehta (@MMehtaNYDN) September 20, 2016

There are a few acceptable predictions that I would've taken instead of this absolute click-bait assumption; it would have been fair to say that the Jets and Pats would be tied for the division lead by Tom Brady's arrival, considering the schedule of the two teams (this was written before the Patriots undressed Houston). An even better prediction would've been that the Jets would be leading New England in total offense, which is completely reasonable due to the Pats' limbo at quarterback. Those assumptions would have been completely plausible and when he was proven wrong, not as much backlash would've came his way from his Patriot followers. But no, this New York homer has to be as crazy and out there as possible because maybe if he writes about the Jets finally being in first place, it just might come true and he can laugh in the faces of Patriots Nation. Instead, the exact opposite happened, and now he is backpedaling all the way to New Hampshire. After the Pats completely embarrassed the Texans on Thursday Night Football, Mehta wrote an article the next day titled, "Sorry, Patriot Nation.." in an attempt to cover his behind and get back in his followers good graces. However, in no surprise, he received even more hate for trying to apologize, and even got Tom E. Curran, a popular CSN SportsNet writer, to write an article absolutely bashing him. Mehta responded with this:

Ruthless, Tom. Absolutely ruthless. (BTW, I picked the Broncos to beat the Patriots in AFCCG last year. Who did you pick? I don't recall) https://t.co/fP19FixpJH
— Manish Mehta (@MMehtaNYDN) September 25, 2016

Unreal and quite honestly laughable. This man had the audacity to try to criticize Curran, a well respected writer, for a prediction from last year and that had nothing to do with the topic at hand. This columnist has been making wrong predictions for years now, and this time he really went overboard and suffered the consequences that I'm sure will find him again one day soon. To doubt Bill Belichick is like doubting gravity: you can deny it all you want but eventually you will come back down to Earth... with an angry mob of Foxboro Faithful Twitter users ready to pounce on you.