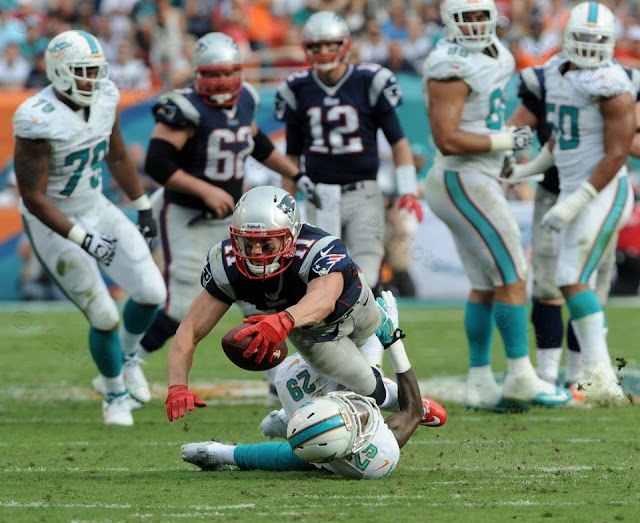 So, we all got it wrong when it came to last week's thrilling upset win over the Arizona Cardinals. With that game in our back pockets, the PatriotsLife staff is looking ahead to today's game against the Miami Dolphins. The Dolphins obviously aren't as good as the Cards, but they still present a formidable challenge.

Hopefully we get this one right.

The Dolphins' defense is pretty good, and they put up a solid effort against a Seattle Seahawks team who some believe is a Super Bowl contender. You've always got to account for Cameron Wake and Ndamukong Suh, but the Patriots should have enough, even without Rob Gronkowski for the second week in a row, to best Miami. Jimmy Garoppolo looked pretty comfortable last week, and I believe that will continue with the home crowd behind him. I'd expect another big game out of Julian Edelman and Chris Hogan, too. For the Patriots' defense, stopping Jarvis Landry will be key.

Compared to last week's showdown with Arizona, Miami is a much easier opponent for the Pats. Jimmy Garoppolo has looked good so far, and the Dolphins rarely pose trouble to the Patriots in Gilette. Though the Fish played Seattle tough last week (and might have won if not for a Kenny Stills drop), the Patriots are the best team in the league. Bill Belichick will execute a masterful game plan once again, the passing game will carve up a bad Dolphin secondary, and the Patriots will roll to a 2-0 record, with Miami falling to 0-2. No surprises here!

Despite Belichick's obvious distaste for last January's dud and his apparent attempt to motivate the Patriots into punishing the Dolphins, look for a difficult grind on Sunday. The Patriots will struggle to move the ball offensively but the defense will stop the run and Tannehill, forcing the visitors to move the ball down the field in small chunks. Miami will show heart but some stupid penalties along the way and a late strip sack by Long will seal the game.

After a superb win against the Arizona Cardinals, the Patriots will go to 2-0 with a comfortable win against the Miami Dolphins in their home opener. If the defense can play anything like they did last week, the Dolphins offense will struggle to get going but the key to the win will be protecting Jimmy Garoppolo. He looks like he can cope with the pressure of the league but a front four that includes Cam Wake, Mario Williams and Ndamukong Suh is something totally different. The key player will be Julian Edelman because Garoppolo will need to get his passes off quickly due to these three defensive ends bringing the heat, and Edelman is a receiver that manages to create separation from his defender quickly.