With LeGarrette Blount's recent success, do the Patriots finally have a run game? 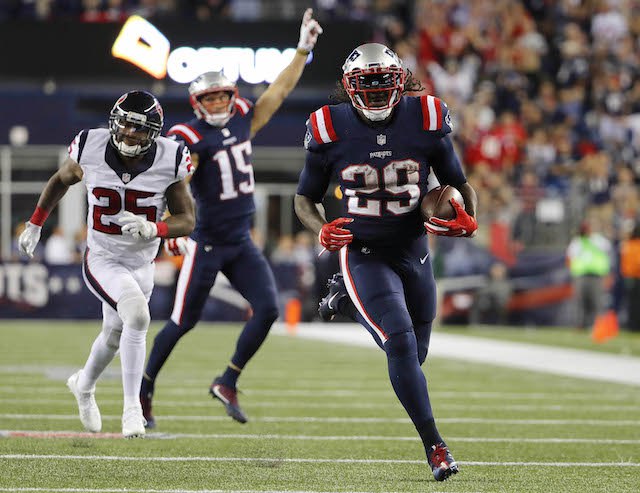 Ah, how I love to reminisce about the good 'ole days with Antowain Smith and Corey Dillon, providing around four yards a carry and making life so much easier on Brady. Not having to sling 40 passes a game and actually having someone to rely on in the backfield to pick up solid yardage. Those were the days. However, those days look like they might be making a much anticipated return, as New England's offense has mainly been attributed to one aspect: the run game. LeGarrette Blount has nearly 300 yards rushing and 4 TD's to start the season and, unlike his previous counterparts before him (Stevan Ridley, Benjarvus Green-Ellis, to name a couple), Blount seems to have what it takes to give New England it's long awaited run game.

I'll be the first to admit that I was not a huge Blount supporter to start the season, and still aren't up to a point. Yes, he has been magnificent running the ball to kick off these first three games but it takes him at least a quarter or two to get going. Take last night for example: his longest run of the first half was for around 8 yards, and the rest were barely for any yardage at all. It wasn't until the second half that he really kicked it into high gear, which is perfectly fine. His no yardage runs aren't necessarily his fault, as McDaniels likes to call a HB Draw play on first and ten just about every time, with little to no success in terms of gaining yards. There are rarely any holes along the offensive line and without a hole, Blount is pretty useless, let's be honest. However, when those holes are there, he is among the best in the league at bulldozing his way through and picking up extra yards. Here he is finding a hole and taking off for his second touchdown run:

Don't get me wrong, I think LeGarrette Blount is our main guy in the backfield and rightfully deserves to be; he's got the numbers and the production to be our guy for the entire season. Although, I think there are better ways to use him in the offense. If you watched the game last night, I'm sure you remember seeing James White run the ball a few times because they were memorable runs. They don't call him "Sweet Feet" White for nothing, and he put those moves on display last night, juking defenders out left and right as he picked up 6-7 yards on plays where he looked like he was stopped short. I definitely think he's earned to privilege to get the ball handed off to him more and he provides the confusion element as well, as he's more known for catching the ball on screen and little in routes. He should for sure get the chance to show what he can do and I think if he has success, you're going to see a very versatile run game in New England's backfield because don't forget about Dion Lewis. You remember, our highlight reel of a running back who got injured in week 9 last year? He comes back after week 6 and with a committee of him getting a mixture of handoffs and catches along with White and Blount trucking defenders and breaking off for long runs, that's going to be an extremely hard run offense to stop.

So to answer the question of "do the Patriots finally have a run game?", I think yes. LeGarrette Blount has been fantastic to start the season and is breaking off for huge touchdown runs at least once a week. As long as he keeps churning those legs and New England doesn't overuse him, he should continue to produce big numbers. Alongside Blount are White and Lewis (not until week 7), two backs who have virtually the same skillset and could be extremely beneficial when they are in the game, as they provide the element of surprise due to the fact that they are a threat to either get a handoff or catch a screen pass with just as much ease. Once all three of these guys are working together in harmony, look out NFL, because the Pats have a run game now too.