Bills threaten Patriots about sideline antics prior to Sunday's rematch 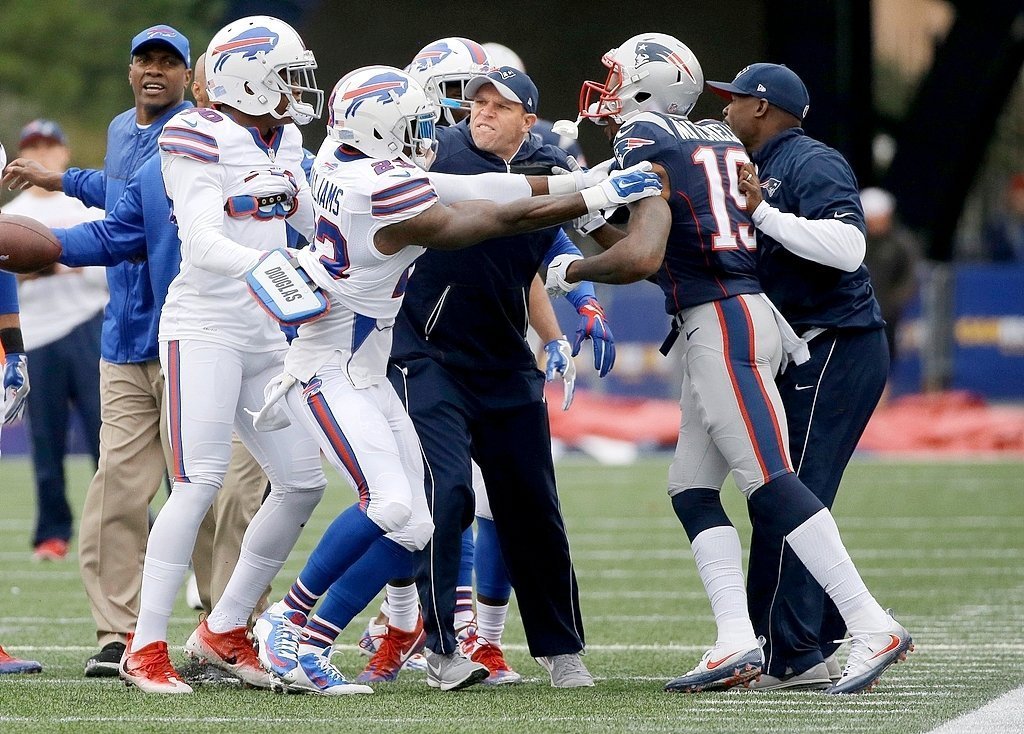 Is there a more talkative team in the NFL than the Buffalo Bills? I mean seriously, whether it's their blindly confident head coach or the "trash talking" players, it seems that whenever the Bills and Patriots matchup, Buffalo needs to say as much garbage as possible in the week leading up to the game. Has it ever worked for them? No, and it won't work this weekend either. You need a lot more than some third grade trash talk to divert Tom Brady's attention.

If you didn't watch the Week 4 debacle that included the Patriots being shut out at home by Buffalo, then you probably didn't see the pregame scuffle that took place around midfield. Jacoby Brissett and Malcolm Mitchell wee casually running in the middle of the field and then, out of nowhere, a couple of Bills safeties started to shove the quarterback and exchange words. Brissett kept on jogging, as he should have, but Mitchell didn't take too kindly to the fact that these visiting players shoved his quarterback for no apparent reason. Three Buffalo players were fined for their part in the incident, citing that the two New England players "disrespected" their side of the field by running through their warm-up drills, which they didn't. And when you're playing at Gillette, you don't get your own side of the field.

After the 16-0 shutout, Buffalo had some words to say about the scuffle, and now are still talking about it a month after it took place. Cornerback Stephon Gilmore says New England can expect the same type of retaliation if they disrespect their side of the field again and safety Aaron Williams says he's perfectly comfortable receiving another fine if he has to teach the Patriots a lesson again... Nice team of thugs you have over there, Rex.

This is just classic Bills. They know they won last time only because Brady was out, Ryan even said so himself, and now they're trying to get inside New England's head with one last feeble attempt. I'm sure Bill Belichick has gathered his players up and told them to not listen to it and just do their own thing. However, it'll be interesting to see how the Buffalo players react when Brady and Jimmy Garropolo do their customary pregame run down the sideline of the field. I would just love to see them go over and shove Brady; then we'd really be in for a great game. Good luck, Buffalo.