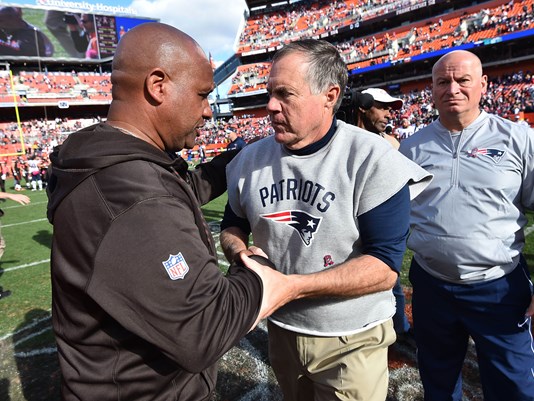 There was a commercial during Michael Jordan’s heyday that showed you could “Be like Mike” just by drinking a bottle of Gatorade.

Hue Jackson and the Browns will soon find out it won’t be as easy to be like the Patriots and what they have built over close to two decades. After the game Jackson had nothing but praise for Bill Belichick and how well the team was prepared against his Cleveland Browns.

Obviously, my hat is off to the Patriots. They played a heck of a game. We didn’t play as well. As I told our guys, we are going to keep working because as I said earlier, I’m very envious of that team and their organization because of what they are. Someday, we are going to have that here. That is the plan.

The plan has been easy to talk about and observe from a distance. Create a sustainable system in all three phases of the game, sell your system to an owner willing to be patient enough, obtain players that are versatile enough to play in different areas of your system, and get the quarterback.

Two of the greatest challenges for Hue, but really for any head coach, is to have that balance of luck and continuity with an organization to foster the type of system/dynasty the Patriots have built. For the Browns being a franchise that has buzzed through 9 head coaches and 27 different starting quarterbacks since 1999 it's hard to see that plan come to fruition any time soon.