How Did Bill Belichick Stumble Upon Elandon Roberts? 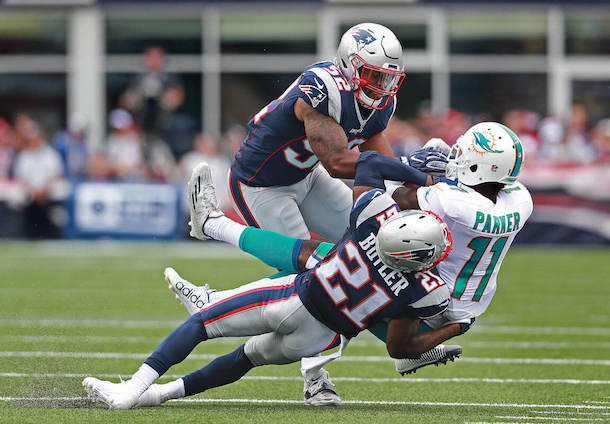 The New England Patriots are probably thanking their lucky stars that they actually stumbled upon a find like Elandon Roberts. You cannot impute anything other than luck to Bill Belichick for stumbling upon the rookie because anyone studying the NFL lines must agree that he is a great find.

It can be argued that it was only because of their avid interest in dual-threat Navy Quarterback Keenan Reynolds ahead of the NFL draft this year that they came upon Roberts.

The Patriots’ Week 5 win over the Cleveland Browns was especially impactful for Roberts who wowed fans with seven tackles in the game. Bill, when asked about the rookie, remembers vividly his unexpected introduction to Roberts.

This was during the Navy-Houston game in November of 2015. Bill had his eye on Keenan Reynolds, and Reynolds didn’t exactly disappoint, throwing something like 300 yards and a whole lot of passes in the game.

The game was definitely a boon for Reynolds and it saw him throw the most passes of his career; however, impressive as Reynolds was, Bill couldn’t ignore Houston’s middle linebacker, Roberts.

At 6-feet and 235-pounds, Roberts basically terrorized Reynolds, keeping him on his toes throughout the game. Houston eventually came out on top, winning the game by a notable margin, and Roberts played a part in that victory.

By the time the game ended, the linebacker had seven tackles and two and a half sacks. You could see the way he kept the pressure on Reynolds. The fact that Reynolds was eventually forced to incur his only interception all season wasn’t even that big a surprise for anyone who saw Roberts play.

Bill didn’t merely take note of Roberts’ size. He also noted the way Roberts kept making plays. More than that, he also blitzed. He was wherever he needed to be, primarily because of his running ability, and Bill couldn’t believe he didn’t know the identity of the linebacker.

The first thing Bill did once the game ended was to get as much information about Roberts as he could. He noticed that the only reason Roberts slipped to the 6th round of the draft was because of his lack of prototypical size; otherwise, no one could ignore the fact that the linebacker finished as the Division I leader in solo tackles at the end of the previous season.

Bill wasted no time in snatching him up. And Bill hasn’t exactly been disappointed with his decision. Bill has nothing but good things to say about Roberts. The linebacker runs well; more importantly, he plays strong and he has got explosion, with Bill also noticing that he probably doesn’t have the kind of length you find in other players at that position.

Roberts’ instincts set him apart. He knows how to find the ball and how to get it in the right place. It didn’t take the Patriots Linebacker coach long to confirm all these positive factors about Roberts.

The head trainer Mike Oshea also gave Roberts a glowing review; it is a wonder that Bill stumbled upon such a powerful find, Roberts playing 31 snaps and leading the Patriots in tackles during the Sunday game against Brown. He was definitely a fortunate find.
>> You may change the informative link or its position, just keep the link below the our link.

Send me the link once you have it ready, I need it for final confirmation and to get you paid.