Check the Film: Pats defense bends too much in loss to Bills

After each Patriots game, I'll be taking a look back at the game film via the NFL Game Rewind and posting my X's and O's observations. Without further ado, here are my takeaways from Sunday's dispiriting loss to the rival Bills.

First off, it's impossible to win when the offense puts a big fat goose egg on the board. Sunday's loss wasn't pretty by any means on offense, defense or special teams, but the anemic performance of the offense gave the team virtually zero chance of winning. That's certainly where the brunt of the blame should lie for the result.

Despite that, I decided to focus this film study on the defensive performance. Why? Largely because the Jacoby Brissett-led option-and-misdirection offense that was trotted out there Sunday is unlikely to be seen again in 2016. However, this same Patriots defense will take the field in less than a month to face this same Bills offense, and they'll have to perform much better the second time around.

The defensive keys to this matchup seemed remarkably clear going into the game. Stopping the run had already been a key against the Rex Ryan-led Bills, but figured to take on an added importance this week with the already poor Bills passing attack missing their best playmaker in Sammy Watkins. Down both Watkins and Greg Salas, the Bills receiving depth chart figured to feature the likes of Robert Woods, Marquise Goodwin and Walt Powell. It stood to reason that the Bills would try to establish the run early and often with LeSean McCoy, their lone remaining star on offense.

However, dual threat quarterback Tyrod Taylor figured to make the offense far more difficult to defend than it should be on paper due to two factors: his mobility and ability to throw the deep ball. One of the league's most athletic starters, Taylor flashed his wheels in the previous week's upset of Arizona, scrambling for a 49 yard gain and scoring a rushing touchdown for 20 yards out. The week prior, he showed off his arm, connecting on touchdowns of 84 and 71 yards. Patriots defenders spent all week talking up Taylor's ability to throw the deep ball, along with Buffalo's proclivity for explosive offensive plays.

As a result, the Patriots defense seemed to adopt a bend-but-don't-break approach against the Bills. The film revealed a clear emphasis (even more so than normal) on keeping everything in front of them in the secondary, ensuring that no Bills pass catcher got behind them for a big gain. Content to dare Taylor to consistently make accurate throws and good decisions in the short to intermediate zones of the field, the Patriots went with a zone-heavy approach, rather than the match-up based, press man coverage that normally is a staple of their game plans.

Respecting the Bills ability to hit the home run ball was understandable, but the Pats appear to have overthought this one in hindsight. Rather than trusting their superior personnel to matchup with the least imposing collection of pass catchers they'd seen all season, they went with soft zones that the Bills were able to exploit. Taylor isn't known for his precise accuracy, but Bills pass catchers were often able to find the openings against the Patriots zones wide enough that he couldn't miss.

For an example, check out tight end Nick O'Leary's 17 yard second quarter grab. The Patriots only rush three, with defensive end Trey Flowers dropping into a shallow zone to serve as extra protection against Taylor's scrambling ability. Meanwhile, the rest of the Pats defense drops into a basic Cover 2 coverage, with the safeties splitting deep "halves" of the field and linebacker Jamie Collins dropping deep down the middle as essentially a third safety. Theoretically, the defense has the numbers advantage here with eight men in coverage, but the depth of the safeties/Collins (again, protecting against the deep ball) combines with Flowers and Hightower's shallow responsibilities to create a lot of space for the offense to exploit in the intermediate zones. With only three rushing, Taylor has plenty of time to wait for O'Leary to get open and makes a nice throw over the head of Logan Ryan, who recognizes O'Leary's route late and drops from his own shallow outside zone to contest the play. 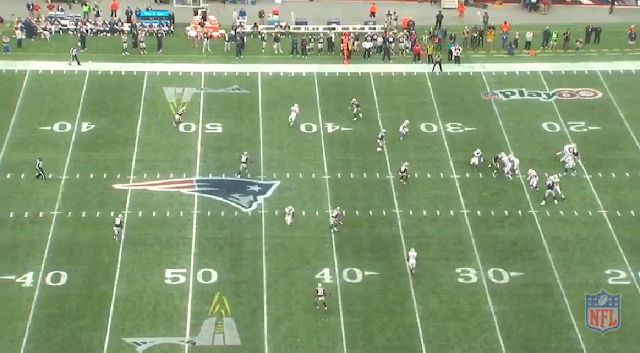 Even when in man coverage, the conservative defensive game plan appeared to call for the corners to give extra cushion to protect against the deep ball. The Bills recognized this and capitalized time after time with in-breaking routes, smartly taking what the Patriots defense was willing to give them. No one exemplified that more than leading receiver Robert Woods, who turned his 10 targets into 7 catches for 89 yards. The vast majority of that production came on slant routes against Logan Ryan, who had a very active afternoon. ProFootballFocus charted Ryan with 16 targets, allowing catches on 12 of them for 111 yards. While Ryan rarely gave up yards after the catch (he allowed just 9.5 yards per catch), he consistently gave his man cushion, repeatedly finding himself scrambling to catch up to Woods' in-cuts.

The second half saw considerable improvement from the defense, as they only allowed 3 points after halftime. One of the key adjustments was simply a return to the basic tight man coverage that has been a strength of this defense over the past year. There was still more zone coverages mixed in than a typical Patriots game plan, but the majority of the obvious passing situations the Bills faced in the second half were met with tight man coverage from the secondary. There was one scary moment when Justin Coleman was beat on an incomplete shot to the end zone, but the adjustment to tighter coverage largely worked. For example, take this third down play, where Taylor eventually escaped the pocket simply to throw the ball away. 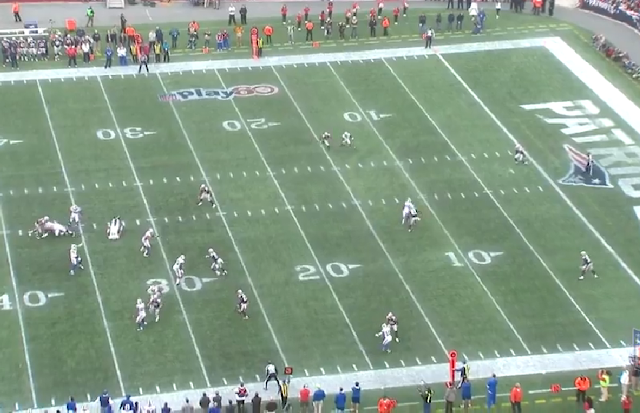 The Patriots largely did a good job of limiting the damage Taylor was able to do with his legs. While the quarterback finished with 5 rushes for 28 yards, nearly half of those came on one impressive individual effort that saw Taylor put a wicked juke on an unblocked Dont'a Hightower in space. Otherwise, the Patriots' tactic of often rushing three and dropping a defensive lineman (usually Trey Flowers) as an extra defender in the shallow zones limited Taylor's ability to make game breaking plays with his legs. This end zone view of that same third down throwaway offers a good visual of that wrinkle, as you can see three defenders (#58 Shea McClellin, #91 Jamie Collins and #23 Patrick Chung) all hovering around the shallow zones of the defense, taking away Taylor's ability to scramble. 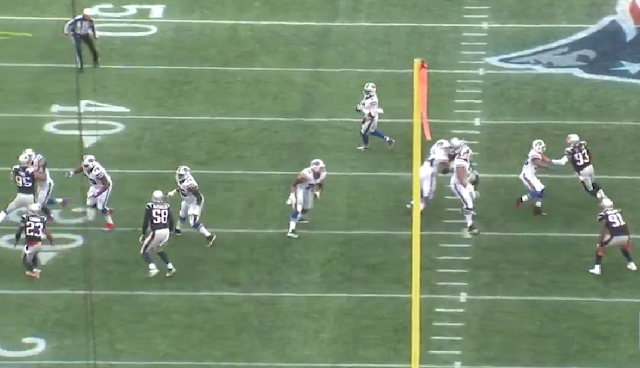 It didn't feel like it at times, but the Pats also did a largely respectable job against McCoy. While the star running back had a number of electric individual efforts, he wound up with a long run of just 9 yards and a mediocre 3.6 yards per carry average. McCoy rarely found running room up the middle, where Malcom Brown and Alan Branch both had relatively strong games, but did manage to get around the edge for solid gains several times. Most of his damage was as a pass catcher, where the Patriots soft zones gave him the space underneath to gobble up a season high six catches for 38 yards, including several third down conversions and the Bills lone offensive touchdown. His elite open field quickness was on full display, even on some of his less successful runs, as he was a major factor in the Patriots racking up a season-high 16 missed tackles.

One factor in New England's second half improvement was the insertion of Shea McClellin into a starting role. McClellin hardly played in the first half, as the Patriots base defense featured Jonathan Freeny at middle linebacker with Dont'a Hightower as an edge setting strongside linebacker and Jamie Collins patrolling the weakside. When Freeny left the game with an apparent arm injury, Hightower shifted to middle linebacker, with McClellin replacing him as the edge-setter on the strongside. McClellin showed up positively on tape as an edge-setter, and his athleticism made him an ideal candidate for the spy coverages the Pats were utilizing against Taylor, but the real benefit from that personnel swap came from shifting Hightower to the middle of the defense. Simply put, he was a massive upgrade over Freeny, who got caught up in second-level trash with regularity during the disastrous first half. From the middle of the defense, Hightower was simply able to impact far more plays than as a strong-side backer tied up with a blocker on the far side of the formation. Hightower's downhill power became far more noticeable in the second half, when he was a major factor in the defense tightening up.

Unfortunately, at that point the damage was already done. While the defense only gave up three points in the second half, that was still three more than the offense would score for them all game. However, perhaps the film from this game could play to their benefit in the rapidly upcoming rematch with Buffalo. While taking away the deep ball should always be emphasized against Taylor, perhaps next time the Patriots will entrust their safeties with that and allow their corners to play tight, bump-and-run coverage throughout the game, daring the Bills pedestrian wideouts to get separation against a talented cornerback group. Perhaps the second half defensive improvement (and uncertain health status of Freeny going forward) will inspire them to keep Hightower at middle linebacker in the base defense, leaving the edge setting to a deep group of edge/linebacker hybrids that will get a boost this week from the return of Rob Ninkovich. Combine those potential X and O's improvements with what figures to be better execution (again, 16 missed tackles?!) and the Patriots should have the firepower to clamp down on the Bills when they meet again. We'll see if Rex and the boys can shutout a Tom Brady-led offense in that rematch.