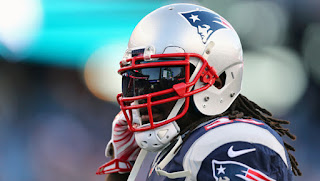 With his 43-yard touchdown strike just 4 minutes into the game, LaGarrette Blount not only gave the Patriots the lead, which they would not relinquish, he made himself some serious cash. Per salary cap expert Miguel Benzan, Blount has yardage-based tiered incentive plan in which he can accumulate bonuses totalling up to $750,000. Today's 1st quarter scamper put him over the 900 yard threshold, triggering a $100,000 bonus. Later in the game, he eclipsed 950 yards, earning him another cool $100,000.


A good day for Blount. Now over 950 yards for the year earning 200K today. 143 rushing yards away from earning all of his 750K incentives.

Blount finished the day with 88 yards (of the team's 133) on 18 carries, keeping the offense on schedule and helping drain the clock in the 2nd half. Against the talented Rams front seven, his patience and vision was on display as he often bounced runs to the outside, getting to the second level of the defense.
A major reason the loss of Rob Gronkowski should sting less than in previous seasons is the offense's concerted effort in sustainaining the running attack to compliment Tom Brady's aerial assault. The balanced has provided stability to an offensive line that, under direction of seasoned coach Dante Scarnecchia, has remained healthy and on the field together for a majority of the year.
Blount and the offense will have their balanced approach tested next Monday night in Foxboro as they host a Baltimore club coming off an impressive home win against Miami. Their defense, lead by a dominant front seven, will be bolstered by the return of Elvis Dumervil and number one cornerback Jimmy Smith in a game that could prove to be a postseason preview.