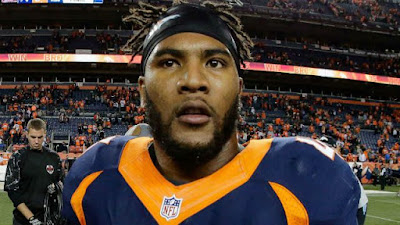 With just inside of 4 minutes remaining in the game, Ward's WWE-style body slam of Patriots WR Julian Edelman on a 3rd down and 3 incompletion garnered a 15-yard personal foul penalty to extend the drive. Ward's response to the flag that effectively eliminated any hopes of a Denver comeback was to flex his biceps at the Patriots bench.

The 7th year veteran's inability to stay in touch with reality was on display as he addressed the media in the locker room. Ward told reporters, including NFL.com's Mike Silver, "We did dominate them".

An interesting take from a key contributor on the NFL's 29th ranked run defense, who had just allowed 136 yards and a TD. The ground game for New England also racked up 6 first downs and steadily chewed clock in the 2nd half. When considering Denver led at no point in the contest, and failed to score in the last 52 minutes of play, one would think Ward would've chosen slightly different verbiage.

Ward, despised in New England for his shot to the knees of a defenseless Rob Gronkowski in 2015's regular season matchup, did his best to climb to the top of Patriots fans' short list with his antics on Sunday.

Not to be outdone, Broncos WR Emmanuel Sanders took to Twitter on Monday with claims that Patriots top CB Malcolm Butler didn't shut him down.


If you think malcom butler shut me down.. child please!! My 2 year old son Princeton can play Cover 2. Go watch the tape. He know better!

Sanders caught his first pass of the afternoon at the 12:33 mark in the 4th quarter, for seven yards. Finishing with 3 catches and 48 yards, 20 of which came inside of 2 minutes against a soft prevent zone, one could ascertain that it simply didn't who had the Sanders assignment.

To date, there is currently no available film on up and coming CB prospect Princeton Sanders.

At 8-6, Denver sits on the outside looking in on the AFC playoff picture.