Gronk's 2016 is officially over 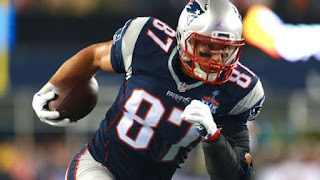 It is now official. The Patriots have placed TE Rob Gronkowski on Injured Reserve today, ending his 2016 season.
To fill the newly available roster spot, the team promoted rookie running back D.J. Foster off of the practice squad. Foster was released from the 53-man roster on Monday, cleared waivers, and signed with the team's practice squad on Tuesday.