Patriots prep for slugfest with Ravens 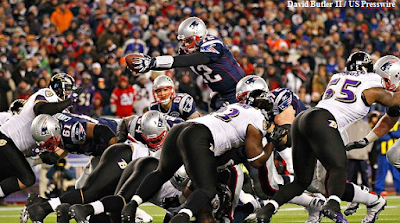 As expected, Patriots players are saying all the right things when in regards to their Monday Night Football showdown with the Baltimore Ravens in Foxboro.

“Any time you play Baltimore, you know it’s going to be a fistfight,” Julian Edelman told reporters Sunday at Gillette Stadium per Zack Cox of NESN.

Week after week, Bill Belichick has his players praising their upcoming opponents in the media, safeguarding against complacency. But this week with the leaders of the AFC North bringing their top ranked defense into town, you know it isn't just lip service.

Monday night will be the first rematch between the two clubs since the 2014 AFC Divisional round, a game which saw the Patriots overcome a pair of 14 point deficits with double passes and clever substitution plays to win 35-31.

Winners of 4 of their last 5 games, the Ravens come into Foxboro riding a wave of momentum capped by a Sunday blowout victory over a Miami Dolphins team who had won their previous 6 contests.