Ezekiel Elliott's suspension was upheld, but he can play in Week 1 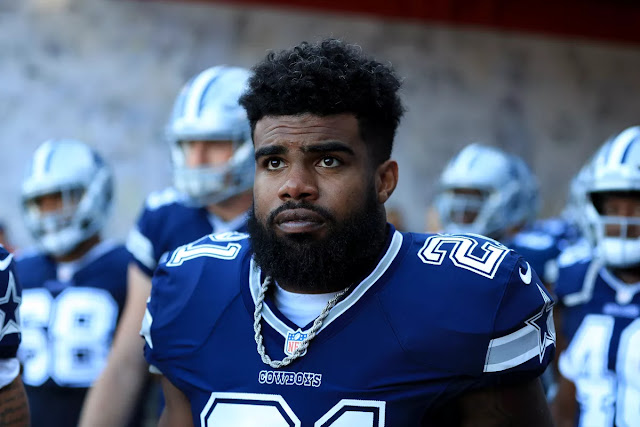 The legal system is weird and confusing, but that's not breaking news.

Ezekiel Elliott is going to suit up for the Cowboys this weekend against the Giants and then maybe sit out the next six games.

An arbitrator decided to uphold Elliott's six-game ban for an alleged domestic violence issue on Tuesday night. However, due to the timing of the decision, Elliott can play this weekend while he seeks an injunction that will allow him to continue to play. That decision will come on Friday.

Given what has already transpired in this messy case, it looks like Elliott is going to try to drag this legal battle out much like Tom Brady did with Deflategate. And while I in no way condone domestic violence, Elliott, much like Brady, is getting seriously boned if he has to serve this suspension.

When Brady's appeal for his four-game suspension was denied, I was in the minority that wanted him to take the suspension and get it over with. I was afraid that if he were to get receive an injunction, he'd have to serve his suspension later that season and miss really meaningful games. But Brady played all of 2015 and the Pats went 3-1 without him in the first four games of last season, so it all worked out.

I would bet anything there are at least a handful of Cowboys fans who have this same fear about Elliott's situation.

And like Brady, there is no hard evidence against Elliott. Four games without Brady was certainly nothing to sneeze at, but six games without Elliott for the Cowboys could cripple a season in which Dallas is looked at as a contender in the NFC.

While they still boast a very good group of receivers and a budding star quarterback in Dak Prescott, he's only in his second season and it would be stupid to rely on two good-but-not-great running backs to shoulder the load. Darren McFadden and Alfred Morris are nice pieces for sure. But they're also often injured and much older than Elliott.

Granted, McFadden rushed for over 1,000 yards the year before Elliott came to town, but it'd be crazy to expect him to do that again even though Dallas has an outstanding offensive line.

To me, this is more of the NFL trying to make it look like it is finally doing something about domestic violence issues after they botched a number of high-profile scandals from Ray Rice to Greg Hardy and so on.

Of course if something changes and Elliott is found guilty, suspend him for as long as you want. Kick him out of the NFL for all I care. Domestic violence has no place in a world already clouded in fear and anger.

But based on what we know, the NFL is treating him unfairly and he should be able to play.