Matchups that will decide the week 3 Patriots-Texans tilt. Plus a score prediction 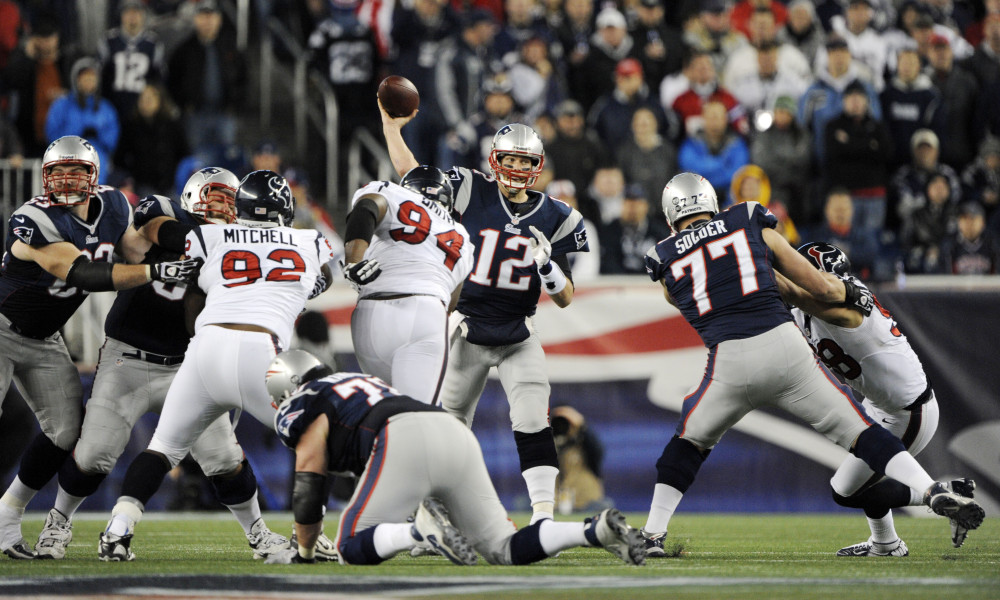 Here we are again with some week 3 matchup predictions! If you missed the first two weeks of this blog series you can check them out here.
Week 1
Week 2

Just for some clarity, I was way off week one and pretty spot on week 2 in my predictions on which matchups will determine the game. We are improving everyday here at PatriotsLife so that’s what matters.

The Patriots-Texans games are always interesting for whatever reason. Houston plays the Pats close. The defense makes Tom Brady work for everything he gets and that showed in last season’s playoff matchup with the Texans.

Lets get to the matchups!

Marcus Cannon vs. his injuries vs. JJ Watt:
This is the first matchup of a matchup here in this blog series. Getting all inception on you Pats fans on a Friday. This is a dual matchup here because Cannon has been dealing with an ankle problem and a concussion this week. He has yet to be a participant at practice this week but that could change come the Friday afternoon session. In any case, he will be hobbled at best trying to block a healthy JJ Watt or will pass the responsibility over the Cam Flemming if he can’t play. Cannon has been excellent blocking the all-pro defensive lineman in recent years and Patriots fans should feel comfortable with Cannons ability to keep Brady clean. Flemming does not instill any confidence that he can consistently block Watt so that could be a huge issue come game time.

Prediction: It all depends on Fridays practice whether Cannon will play and this is being written in the morning so it’s a complete guess but I will infer that Cannon plays and draws the Watt assignment a decent amount. The Patriots will help Cannon all they can with tight end double teams, double teams with the guards occasionally and chip blocks from running backs. Watt will be disruptive at times though and Brady may not have all day to throw when you add in Jadeveon Clowney and Whitney Mercilus. Advantage Houston pass rush but look for Brady to get the ball out of his hands FAST.

Injured Pats receivers vs. injured Texans Secondary:
Danny Amendola, Phillip Dorsett, Chris Hogan and Rob Gronkowski were all limited at practice this week. Three of the Texans top 4 cornerbacks were listed on the injury report yesterday, and while at least two look like they will play they are banged up like the Pats receivers. Whether healthy or not, I give the advantage to the Patriots skill position group. The Houston secondary of Kevin Johnson, Jonathan Joseph and Kareem Jackson will look to jam the Pats receivers at the line and allow the pass rush to try and sack Brady but they don’t have the speed to contain them deep.

Prediction: The Pats players are just too quick and fast to keep them in front of you for an entire game. Brady is going to hit at least one deep ball and use the quick hitters in the middle of the field with his running backs who will be mismatched on linebackers. It could be a slog on offense for the Patriots if the pass rush is effective but ultimately the skill on the offense will prevail. Don’t look for a wicked high scoring game either.

Bill Belichick vs. Deshaun Watson:
It has been well documented and talked about extensively how great Belichick is against rookie QBs. He is 8-0 at home when opposing a rookie quarterback so that is not a promising sign for Watson in only his second start and third game played in the NFL. Watson seemed to key in on his star wideout DeAndre Hopkins in almost every situation last week and that isn’t going to be an option on Sunday. Belichick will take away Hopkins with double coverage on every play because the rest of Houston’s wide receivers don’t scare anyone. Watson’s o-line let him down last week as well so he may not even have much time to throw which is a recipe for turnovers. Houston is going to need to feed Lamar Miller in the run game to give Watson a slight chance at pulling out the massive upset.

Prediction: Watson is going to really show he’s a rookie in this one. The Patriots are talented in the secondary and matchup great with the crop of receivers the Texans send out. Hopkins is going to be neutralized by two defenders and either Butler or Gilmore will be on an island against receiver number 2. If the Texans are smart they will try and mismatch Miller on a linebacker but there’s only so many check downs the Texans can make in one game. Belichick will have a spy on Watson all game as well, probably Kyle Van Noy, to stop Watson from using his feet to pick up yards. I don’t see Watson gashing the Patriots much at all and this should be a great day for Pats D fantasy owners.

Brady vs. Texans pass rush and Bill O’Briens butt chin:
I discussed Brady versus the pass rush a bit in the first matchup but this is the singular key to the game so it deserves more space in this blog. The Texans are ultra talented up front and gave Andy Dalton nightmares last week. Dalton is a ginger and sucks so that shouldn’t happen to Brady but the blueprint for beating the Patriots is always getting a pass rush up the middle in Brady’s face. Joe Thuney and Shaq Mason struggle in passing situations sometimes so the Texans will look to make Brady uncomfortable all day and hopefully bait him into an awful decision. The problem about bringing extra rushers up the middle to push Brady out of the pocket is that he is unbelievable against the rush, the best in the league by far. Houston will need to create pressure with 4 defenders, which they can make happen with those studs.

Prediction: First off, Brady will not get swallowed by Bill O’Brien’s butt chin despite the fact that it’s the largest and deepest one in the entire world. There isn’t some secret pass-rushing monster that will emerge from his face and sack Brady on every third down in the game. But Brady will be under heat in this game and his decision-making under pressure will be essential. It will also be essential to see how many players it takes the Texans to pressure Brady because if its any more than 4 this will be a long day for the Texans. Ultimately, Houston will get some serious pressure on Brady but he wont force any interceptions and the running backs will be key to catching quick passes to alleviate the pressure.

Gronk vs. his groin:
Everyone in Patriot nation had a collective massive heart attack when Gronk went into the evil blue tent. Those tents are the purest form of evil that any person from New England has ever seen. Thank the Lord and Savior Jesus Christ that he only ended up with a groin injury that isn’t too bad. He was on the practice field yesterday and should be ready to play on Sunday. How much he plays is the bigger question. At this point lets just all be thankful he didn’t hurt that damn back that has been giving him issues ever since college.

Prediction: Gronk will play but be used mostly as a blocker and a decoy. He can help Cannon or Solder on the edge to limit the edge rush and allow for more double-teams up the middle. If he does run routes the Texans will need to cover him and will throw 2 bodies at him which will open up the many other options. The Gronk effect will be on full display on Sunday and he will influence the game in multiple ways even if he isn’t catching the ball.

Score Prediction: 23-7 Patriots
I don’t see how the Texans offense will move the ball on the Pats especially when Hightower looks like he will be back in uniform. The Texans will score one measly touchdown in the fourth quarter of garbage time and Watson will have three turnovers. Hopkins will be limited to 4 catches and Watson will throw one pick targeting him in double coverage. The Pats offense wont move the ball like they did against the Saints but Watson will give them a short field on multiple occasions to allow for some quick scores. The -13.5 line for the Patriots seems tenuous because the Houston pass rush can flip the script so quickly so I would bet the under instead of the line. The defenses will be the drivers of this game.

Thanks for reading the latest edition of my matchups preview and prediction blog! Check out my website at jakescearbo.com to read more Patriots articles by me!