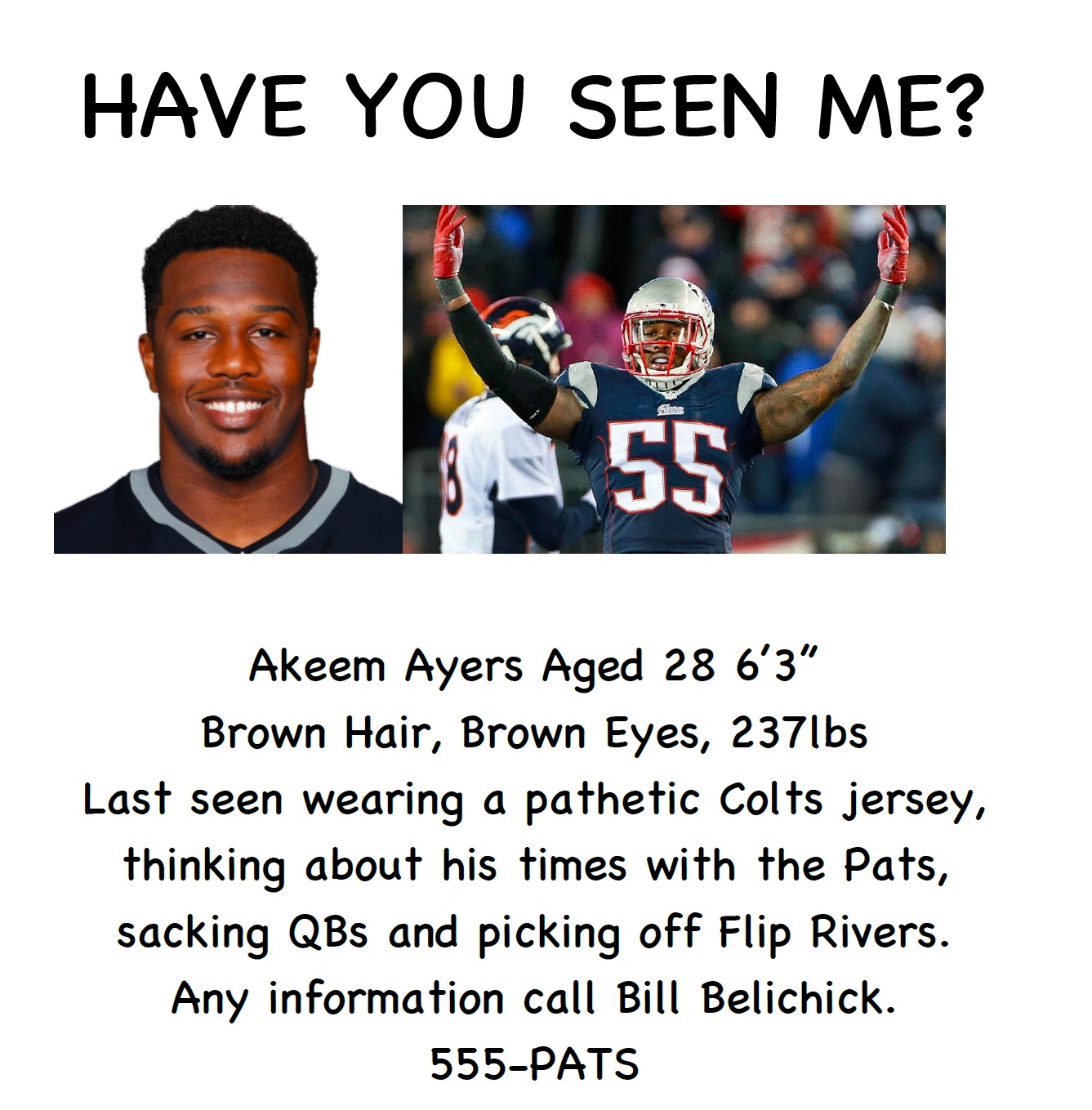 I can only assume Ayers has been devoured by the Demagorgon at this point. Otherwise it's PREPOSTEROUS that Bill hasn’t signed him.

Listen, I know it’s only week 2. The Chiefs game was a disaster, but let’s not panic. We’re going to be fine. Last year the Pats won the bowl with an elite offense, and a pretty good defense. All things considered it looks like even with the loss of Edelman, we’re looking at the same blue print.

That said, it’s foolish to not acknowledge our thinner than 1-ply toilet paper defense. Nink retiring was a bit surprising, but nothing to freak out about. Then Kony Ealy shit the bed (thanks for nothing), rookie Harvey Langi missed week 1, Shea McClellan went on IR, Derek Rivers died, and all of a sudden, things started looking a little sketchy. The holy shit moment happened when Dont’a Hightower’s knee got rolled up on and the entirety of Patriots’ Nation was left like this…

Thank the old gods and the new that Hightower isn’t done for the year, because looking at Cassius Marsh and Kyle Van Noy trying to hold down the middle of the field was like watching Michael Scott trying to pick up chicks.


This leaves us with the nagging question: Where the hell is Akeem Ayers?!?! I’m not going to get too crazy. I know Ayers isn’t Von Miller. But my GOD he’s at least better than Marsh and Van Noy. Do people forget Ayers’ time in New England?? In 9 games he logged 23 tackles, 4 sacks, a pass defended and an interception. Let’s also remember that he made the game saving tackle on Marshawn Lynch in the Superbowl. (We all know High did 98% of the job but someone needs to bury those tap-ins).

Since leaving New England, Ayers bounced from the Rams, and then to Indy, and he hasn’t been able to find a consistent role. There’s a reason he’s an option for the Pats. He’s only successful when he’s not the every down guy with major responsibilities. Fortunately for us, that’s exactly what we need of him. In 2014, Ayers filled in for Chandler Jones when he went down with injuries on the edge. He also proved he could fill roles in the middle of the field, dropping into coverage or stopping the run. I’m not asking Ayers to be a savior. I’m simply asking him to provide some depth. He’s proven he can do that before. Let him do it again. He’s an athletic body who understands the system, and more importantly buys into the New England culture. He even wrote about it in the Players Tribune after winning the Bowl.

At the end of the day, let’s all pray Hightower stays healthy, beg and plead that David Harris figures it the fuzz out and gets on the field, and that our young front 7 guys put out a solid first season. I would just much rather see Ayers coming on in support rather than watching Cassius Marsh flopping around the field like a naked baby at an awkward family BBQ.