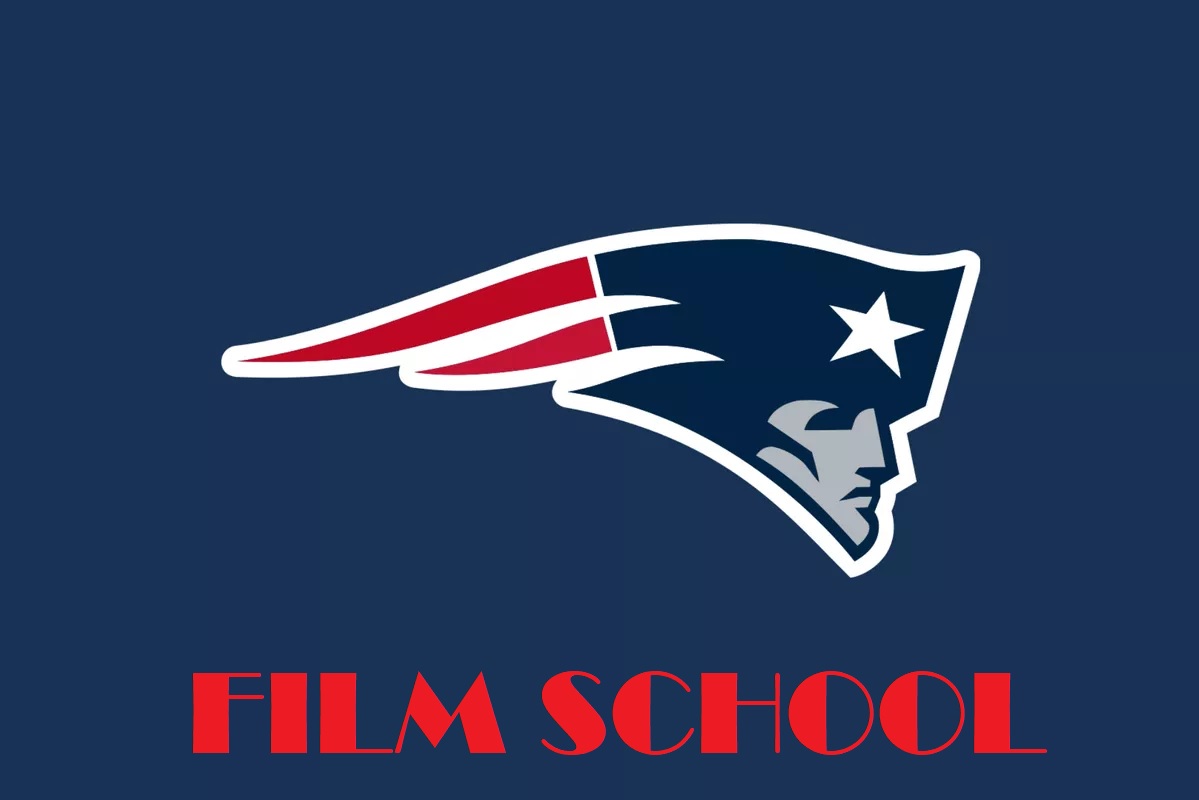 Couldn't keep my eyes open during this one. Even if I had been watching the whole thing this was the three hour lecture that meets once a week in the late afternoon. You don't even get mad at yourself for sleeping. You never stood a chance. Just find a chair in the back row that's not in the direct eye line of the professor and recharge those batteries. Class is officially in session.

I don't have much to say. In our previous losses I have made similar comments, about how the offense or defense didn't deserve anything put up on the projector. But this game was different. We lost badly, sure, but nothing happened. It was just a slog. We did nothing good. They didn't do anything particularly good other than just play better than us. What do you say after that? You just bury the tape behind the shed and try to be better.

But alas my job is to show you something on Wednesday, so that even in humiliating defeat we come out learning a lesson.

It's not often that I shit on Tom Terrific in this blog, let alone in Film School, but he had a bit of a stinker on Sunday so why not? Everyone gets a turn. The media is doing their typical "announce Tom is dead" thing, which couldn't be further from the truth. Nobody was open last week, so most of the struggles weren't his fault. The receiver sucked, the OLine sucked, our running game sucked. But there was one play in particular where I felt Tom was very un-Tom like.

It was the 4th and 6 in the fourth quarter after that murderable Marcus Cannon false start. This game was already FUBAR at this point, but if you had any semblance of hope of pulling this thing out, you had to convert here.

We line up with Hoags at the bottom of your screen, Hollister at the TE spot who is going to release, Jules and Flash at the top of your screen, and Wiggle in the backfield. Love it. Wish that was Gronk at TE, but we can't have nice things right now so we work with it. 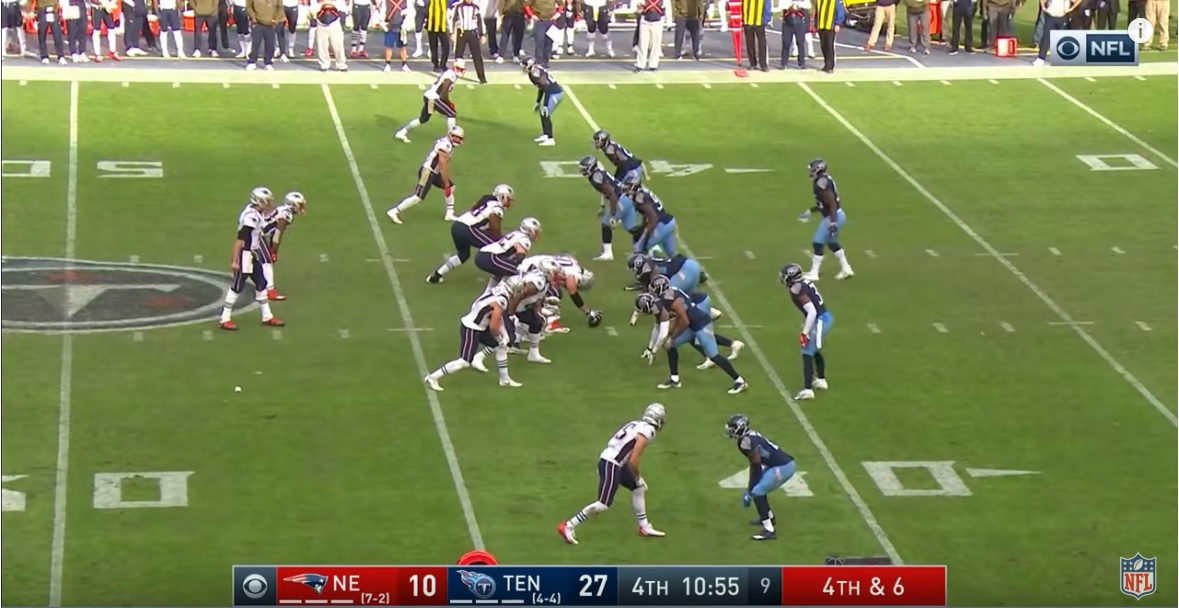 Presumably, Tom does his presnap read, and hikes the ball. Hoags and Hollister are covered well off the line, and running intermediate routes. Tom doesn't really care. You can see he's looking left. He wants Flash or Jules on the deep crossing routes they're going to run. You can see three DBs here. Jules is bracketed, and Flash has single coverage. But look at number 55 on the Titans. That is second year 5th round pick linebacker Jayon Brown. A nice little player. But he has a lot of ground to cover to catch up to known play maker James Wiggle White. 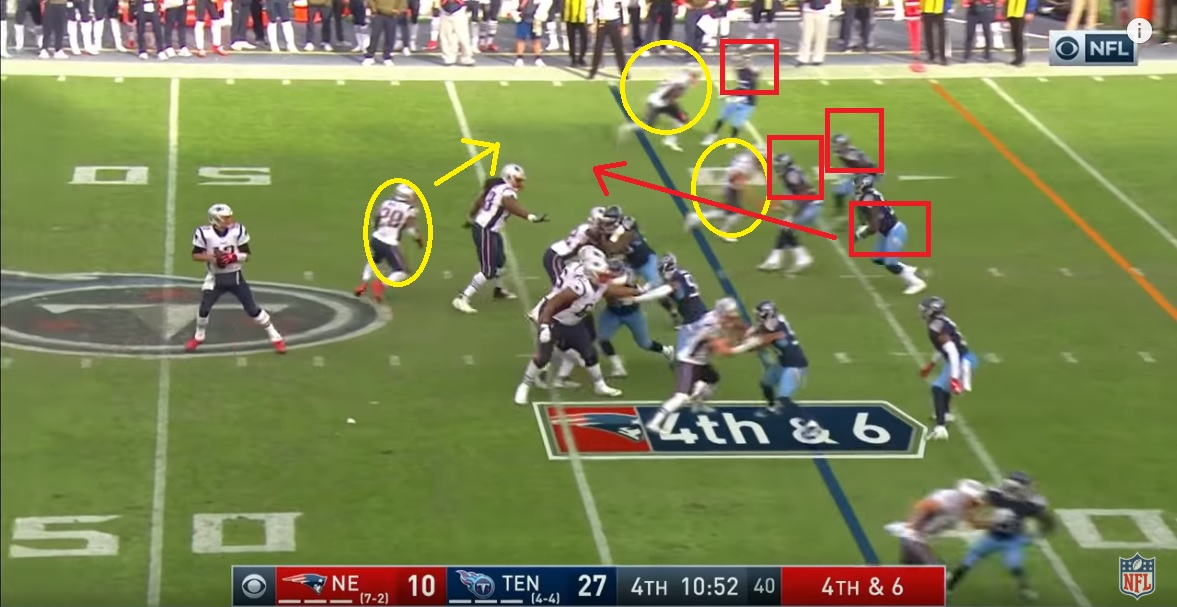 Brown goes to jam Wiggle. I get it. You are out classed as an athlete and you want to slow him down. Get him off his timing. This would make more sense to me if this was a 4th and 2 and you are afraid he's going to turn around a catch a ball right at the sticks in your eye. But this is 4th and 6. 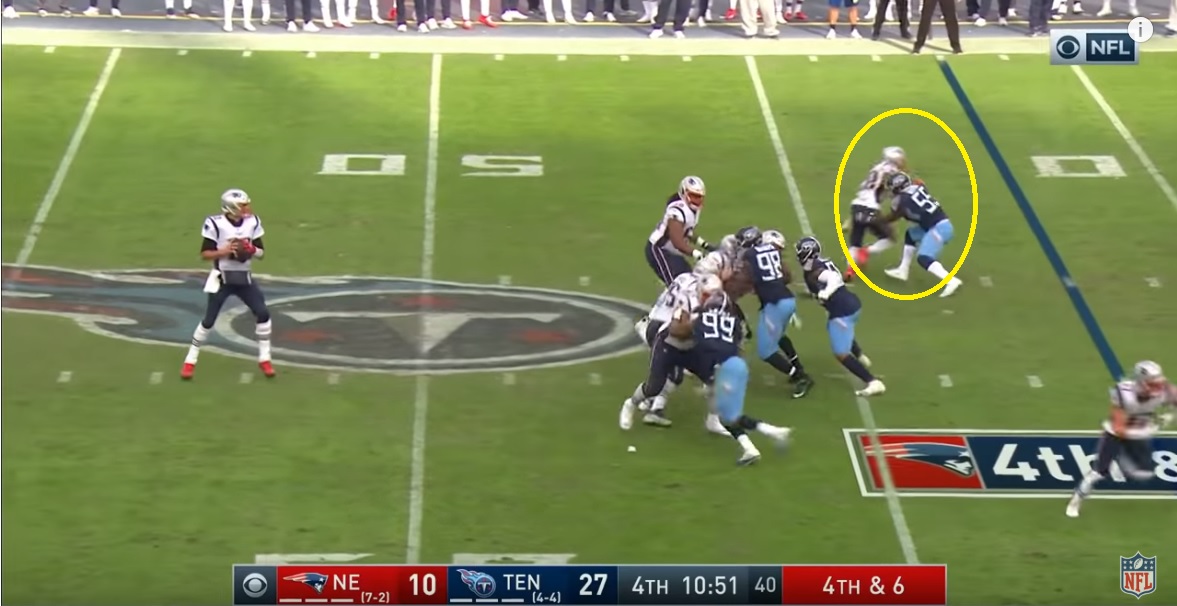 So naturally Wiggle leaves him in the dust. LOOK AT THAT ROOM HE HAS!!! And trust me, if you could expand this photo there is lit-trally no one behind him. Brady could throw a hard low one in there, or he could gently lob one into space that Wiggle runs under. Either way it goes for 30 yards MINIMUM and probably a tuddy. He has a good pocket too. There is a litttttttle bit of edge pressure coming to his right, but that's nothing by NFL standards. This is almost as clean as it gets. And what does Tom do instead? He tries to force a throw to Jules who is in double coverage and it gets broken up by Logan Ryan of all people. 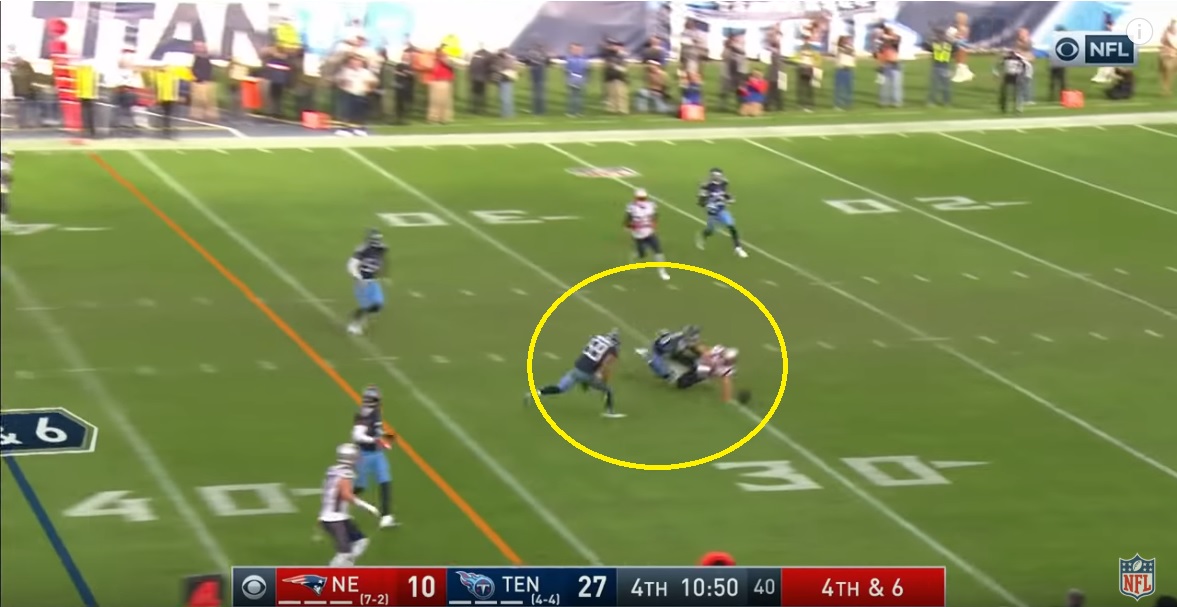 It seemed like Tom was locked in on Jules from the snap. No one is better at reading defenses presnap than Brady. I'd trust him with my life. I have before. But sometimes, whether he misreads a defense or he does't trust our line, he picks who is going to throw to before the play even starts and nothing can change his mind. Not even Wiggle running NUDE up the left sideline with the game on the line.

On defense, I flipped between a bunch of plays I wanted to show. The multiple egregious torchings of Gilmore. DIDI spinning out of tackles. Mariota deciding which wide open player he wanted to throw to on their first tuddy. Instead, let's discuss their last tuddy of the game. It was over. We were beaten and broken. White flag waving from the sideline. I was embarrassed. You were embarrassed. The players were embarrassed. But that doesn't mean you don't play with pride.

The Titans were first and goal from the 10 yard line. Mariota came out in the pistol with Henry behind him. Then he motions right, leaving Henry alone in the wildcat. That might be scary if this was 10 years ago and we were seeing it for the first time. Or it might be scary if we didn't play the Bills TWO WEEKS AGO who ran 8,000 (number approx) wildcat snaps against us. Or it might be scary if we didn't have 9 OF OUR 11 players in the box to defend the run. So thank the heavens for all of that because this play shouldn't be scary at all. We should just tackle Henry for no gain. Orrrrrrrr, let him go lit-trally untouched in the end zone. I'll just leave this here.


Get healthy. Get focused. Win out.