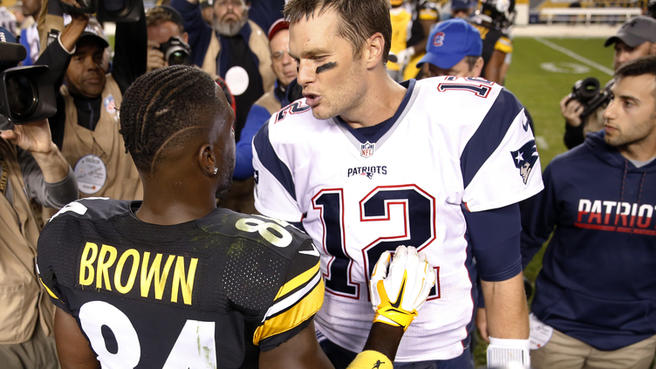 I'll have to admit, watching the Steelers fall apart over this past season has been a fun time. It started off halfway through last season when Ben Roethlisberger said he was contemplating retirement, but really kicked off this off-season when it became clear that Le'Veon Bell would be sitting out the season over contract issues. Pittsburgh then opened their season with a tie against the previously 0-16 Cleveland Browns. In a week 17 win or go home game against the Bengals, star receiver Antonio Brown sat out with an apparent knee injury.

I was surprised to hear this at first, because in those type of games you would think having your best players out there to be very important. However, the knee injury was part of an elaborate cover up scheme that worked for about 24 hours. It was reported shortly after that Brown has been growing frustrated with the team and threw a football at his quarterback and promptly stormed off the field yelling "I'm done!" and has since reported that he wants to be traded. This started a whirlwind of events for Brown which included going AWOL for the rest of the week and throwing tons of shade at the Steelers, mostly on his Instagram account.

On his Instagram story, Brown posted a picture of a Jerry Rice, which began speculation that Brown was lobbying his services to the 49ers. It didn't stop there however. Brown also posted a direct message from Tom Brady which basically had them sharing praise for each other. This was probably a shot at the Steelers because of the history between the teams and it was released out of nowhere.

While crazier things have happened, I don't think this means that there's any chance that Brown wears a Patriot jersey any time soon, but from us in New England, thank you Antonio Brown, the Pittsburgh organization has been falling in on itself and you brought it to the limelight for us to enjoy.