Survey ranks Pats has most hated team in 13 states 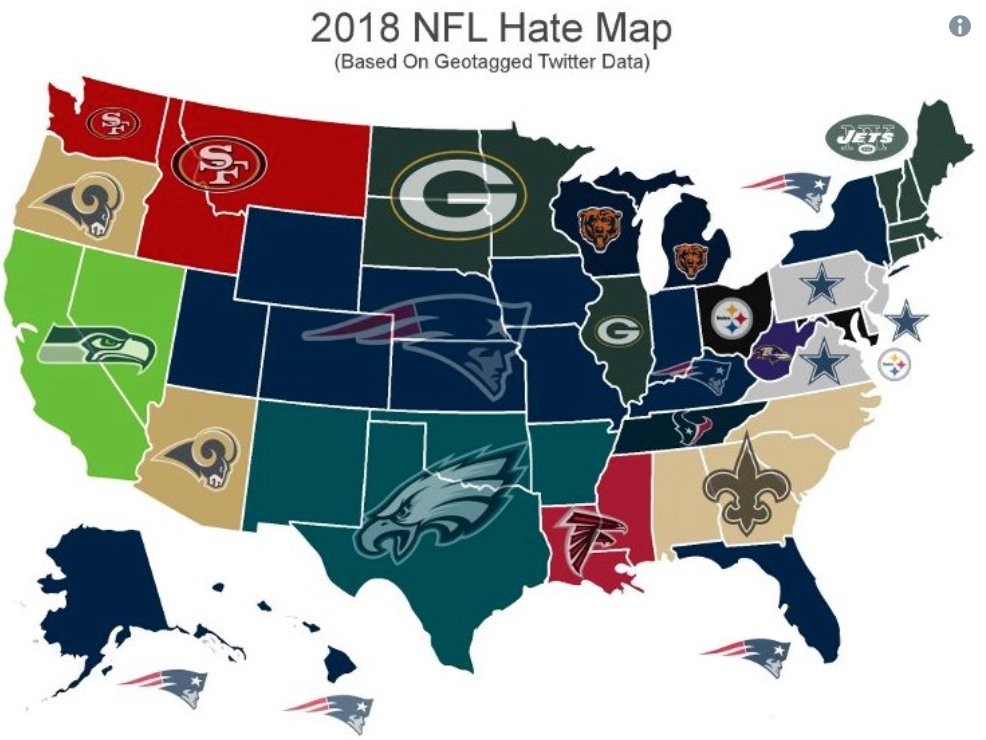 Here's something that should come to no surprise to anyone: most of the U.S are not fans of the Patriots. This hasn't always been the case for the Pats, but probably around the 07 season, people began to get sick of seeing New England. This can be credited to the various cheating allegations against them, but for the most part I think sport fans just hate to see the same team be in playoff contention year after year. For example, most basketball fans that aren't in the Oakland area probably hate the Golden State Warriors. It isn't that you necessarily hate the players, but you just get sick of seeing them win all the time.

Since New England has won their first Super Bowl in 2001, they have won 4 more Super Bowl's, 8 AFC Championships and 16 division titles. With the mindset of a fan outside of this area, I can understand how that can be annoying to watch.

For the most part, the NFL "hate map" (love that name) was mostly sorted out by regions and their rival divisions, so areas at and around Texas hates Philly and California doesn't care too much about Seattle etc. What surprised me the most about this map were the random states that hated the Patriots. I understand states like Florida, New York and Colorado, but the whole mid-west and Alaska and Hawaii were interesting. I guess you can credit the mid-west to being associated with Colorado, and Hawaii also has volcanoes erupting in their backyards and Alaska can have like 22 hours of sunlight or nighttime so I guess they have the fair reasoning for some hatred.

At the end of the day, I totally get why so many states hate the Patriots, which is really why it's hard to go online and face that level of hell after any sort of loss. Go Pats.