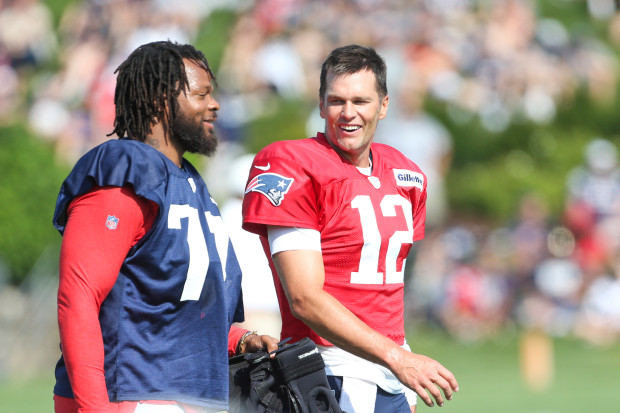 It was a hot one out there in Gillette this morning, as the Pats took the field for day four of training camp. The biggest story of today, was the return of Michael Bennett.

Bennett had missed the first three days of camp for excused personal reasons. In his presser after camp, he squashed any retirement rumors and thanked Bill Belichick for allowing him to miss the days he did.

“I had a personal reason,” Bennett said, “I didn’t retire. Everybody said I retired. I was laughing at home. I didn’t retire. No, I just had a family issue that I had to go take care of. I was lucky Coach Belichick — it’s nice when you have a coach that sees you as a human, sees you as a human being, not just a number and you’re able to go talk to him, tell him what’s going on, and you’re able to go take care of it. That just makes you want to play harder for a coach — when he believes in you and lets you take care of your family first."

This seems like a huge step in the right direction for Bennett with the Patriots, as it looks like he and Bill have a good relationship right out of the gate.

As for his performance today, Bennett was an absolute terror during his reps, frequently getting in the backfield and really just bullied the second offensive line unit.

In other attendance news, wideout Dontrelle Inman was absent today for unknown reasons, but David Andrews was again present, but in limited fashion.

The team is still opting to play it safe with Isaiah Wynn, who was limited today and saw no starting reps. Joe Thuney was back at LG, as Dan Skipper took over at LT for the first unit.

Brady also had a sideline meeting with the tight end group, and Sony Michel and N'Keal Harry spent more time with Hoyer.

The redzone unit on defense continues to be lights-out in practice, making life very difficult for the offense to get anything done.

Stephon Gilmore also continues to be elite in coverage, only getting thrown at once today; a pass from Brady to Dorsett that he broke up.

The offense continues to build its way into form, while the defense is looking like it could shape up to be one of the best in the league.