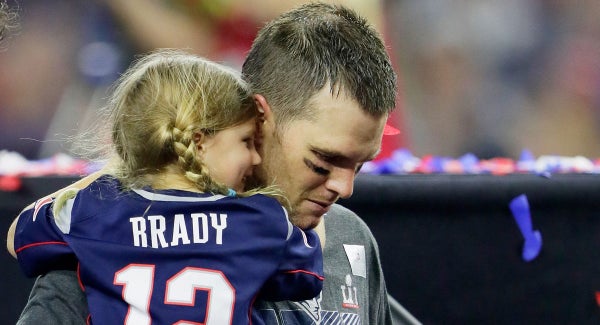 In a recent post from Tom Brady's Instagram, Brady posted a video of his daughter and himself jumping off of a cliff together. The video shows Brady pulling his daughter into the water after she hesitated to jump. While most rational people thought nothing of it, of course there was a twitter mob that came after the 41-year old quarterback, calling him irresponsible and reckless.

Anything for a selfie ...

Actor Dwayne "the Rock" Johnson commented on the post.

"You KNOW I have complete faith in you as a man, friend, player and father - but this just gave me anxiety. Geeezus 😂👏🏾👏🏾"

While Brady took some heat from people online, people also came to the defense of Brady.

Adventure, trust, courage, bravery, love. So many lessons in this video. Continue to be her first love bro https://t.co/25hLcODJya
— Benjamin Watson (@BenjaminSWatson) July 22, 2019

if he let go, vivi would’ve slipped, hit those rocks and this would’ve turned into an ACTUAL news story. good on tom for using his head and dragging her in with him to avoid anything more serious than outraged cry babies. https://t.co/Q71TwmlOqM
— brianna pirre (@bsp_13) July 22, 2019

This tweet was my exact reaction. An harmless act.

Wow a father took his family on a vacation and had some fun jumping 7 feet into a pond with his daughter. Lock this man up.
— 🅱️ig 🅱️enny 🅱️oomstick (@DingDongsAllDay) July 22, 2019

The fact that this is a story at all, and especially in a week where there are legitimate concerns about Tyreek Hill, who broke his son's arm and threatened his girlfriend, saying "You need to be terrified of me, too, bitch" is absolutely mind boggling. Seriously. Well, I guess now we wait to hear from Goodell on if there will be a four game suspension for Brady. Theres nothing better than sports news in July!

View this post on Instagram
If Vivi is going to be an Olympic champion one day, it probably won’t be in synchronized diving. Daddy always gives her a 10 though! 🏅🏅🏅
A post shared by Tom Brady (@tombrady) on Jul 19, 2019 at 1:26pm PDT