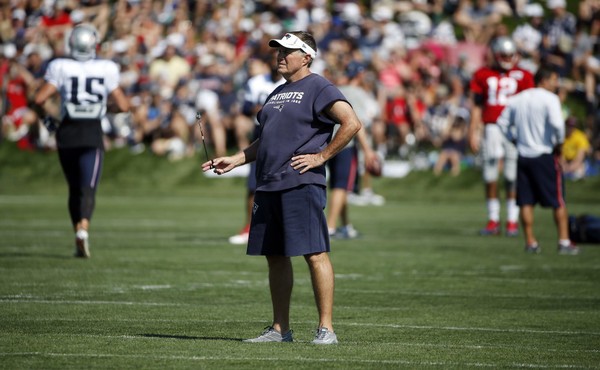 Your New England Patriots returned to their second day of camp today, with perfect weather conditions and a packed house. It's still early enough in camp where it was generally a laid back walkthrough without padding and some more drills.

There were still some absences today, as David Andrews, Michael Bennett, Cole Croston and Yodny Cajuste were not spotted. Bennett had an excused absence for today but it is still unknown what the situation is with Andrews.

Deatrich Wise returned from the PUP list today, looking like he carried no setbacks. Those who were on the PUP list yesterday were still present but not active today, but joining them today for a day off was Tom Brady. There were no injury concerns, as Brady was at practice, just not suited up and spent most of the day working with guys in smaller drills.

Although still on the PUP list, Edelman, Thomas, Michel and Ebner were all doing footwork drills on the lower practice field. Isaiah Wynn and Deatrich Wise were also seen on the practice field, working on conditioning drills.

With Brady having the day off, Brian Hoyer and Jarrett Stidham had more opportunities on the offensive side of the ball. Hoyer went 10 for 13 on 11-on 11's and Stidham went 9 for 12 with an interception.

As you'd expect, Stidham looked like a rookie out there for awhile, as he often held on to the ball for too long and threw some wild balls. Overall, he looked to tighten up as practice went on and is still building up his confidence and trying to slow down the game.

The tight ends had some sloppy drops early on in practice, but Matt LaCosse certainly made the catch of the day in the endzone, jumping over Duron Harmon and Elandon Roberts for the TD. He was quickly met with a very fired up Brian Hoyer.

Maurice Harris has been quickly become one of the stand out players in camp, being targeted several times and making some really nice catches in the endzone, so keep your eyes open for his growth in the system.

Not too much to report on defense, as they've really been stellar so far in camp. Devin McCourty, Duke Dawson and Obi Melifonwu all hauled in some interceptions today, Melifonwu brought in 2 on the day.

The defense is showing to have very solid depth and was very strong in the redzone drills.

Today's practice featured more special teams that yesterday, and the fans got to witness rookie punter Jake Bailey, who really stood out today. I was watching from the top of the ramp behind the field and let me tell you, this guy can get after it. Bailey has one hell of a leg and recorded 3 punts with 5 seconds or more of hang time.

Overall, another solid day of practice at Gillette. The Pats will be back again tomorrow morning at 9:15 (gates open at 8), for their first practice in full pads, so get there early, as it will be another beautiful day and likely another packed house.