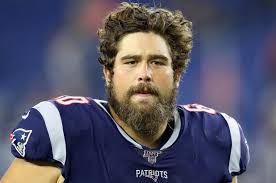 Patriot fans were dealt some frightening news last night, as center David Andrews was hospitalized for blood clots in his lungs. It has since been reported by the Boston Globe that Andrews has been released from the hospital following treatment.

Patriots center David Andrews released from hospital after being treated for blood clot in lungs. https://t.co/iT9arHkz6O

Treatment and recovery time for blood clots is considered to be significant, possibly up to three months and could very well take the whole 2019 season.

Football aside, this news is very concerning for Andrews' overall health. This is one of those situations where you just forget football altogether and just hope Andrews is able to recover back to full health, no matter how long it takes.

As for the Patriots, this is a significant blow to the offense. Andrews and Brady have built up a lot of chemistry over the past few seasons, and it will be hard to replace with the regular season only a week away. Fourth yeat backup Ted Karras is expected to fill the role at center for the time being. In his three seasons with New England, Karras has only started four games at the line.

Whether it take a few weeks or the whole season, we all hope for a speedy and a 100% safe recovery for David Andrews.