The Patriots released Ryan Allen and I am devastated about it 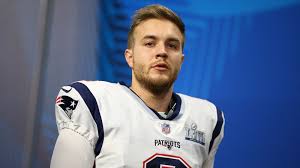 I really shouldn't be this bent out of shape over a punter, but every man has his limits. Don't give me that "well hey man he's just a punter", argument either. That's the equivalent of saying that John McClane is "just another cop", he's not and yes that argument makes perfect sense.

I have to say, when the Patriots traded up in the draft to select a second punter in two years, I began getting nervous for Ryan Allen. It seemed too odd of a coincidence and I feared that Allen's days as a Patriot might be getting numbered, until he kept doing stuff like this:

As Pat McAfee correctly stated, this man could make some magic happen. To further cement himself, In Super Bowl 53, Allen then went on to have 5 punts for 215 yards and had 3 of those kicks land within the 20. This may sound ridiculous, but if Julian Edelman had a few less catches that day, there was a legit argument for a punter to hoist the MVP trophy.

In his 6 years as a Patriot, Ryan Allen collected 3 Super Bowl rings and was about as reliable as they come. I have been left to assume that Jake Bailey must be one hell of a weapon if he won the job.

I'm sure Allen will have a new home rather quickly, but for now, help me pay tribute.

Don't cry because it's over. Smile because it happened.