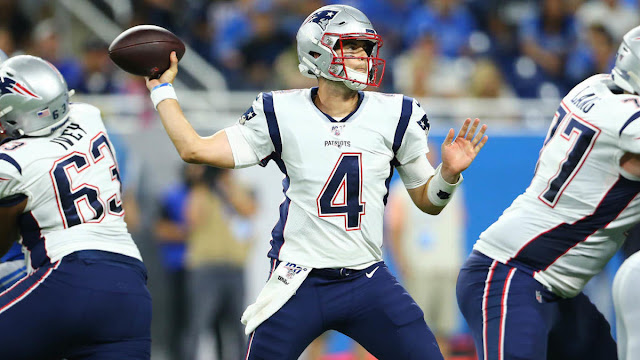 First off, this is absolutely crazy that I have to write about this. Nothing against PatriotsLife, nothing against Jesse (Who helps us choose topics to write about) but the fact that people actually think that Tom Brady doesn't like it when his backups succeed is asinine. Absolutely bananas.

Tom Brady didn't take a single snap, in the Patriots first preseason game, against the Lions. This gave Brian Hoyer and third string quarter back, Jarrett Stidham, an opportunity to have the spotlight. Brian Hoyer had a really nice game. He posted a 12/14 game with 147 passing yards and two touchdowns. All eyes were on Brady as he seemed ecstatic over Hoyer's success. After Hoyer's success, the Pats brought in the rookie quarterback, Jarrett Stidham. Stidham had a nice night as well. Stidham went 14/24 for 179 yards and one touchdown. Now, people are claiming that was not the case, whenever Stidham threw touchdown. You make the call.

TD reaction to Hoyer on left.

TD reaction to Stidham on right.


Tom Brady quickly denied the claims in a recent interview with WEEI.

Bill you have any thoughts on this?