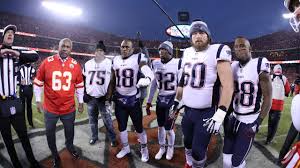 The Patriots announced 7 team captains for the 2019 season, and making his debut as a first-time captain is linebacker Elandon Roberts. Along with Roberts are Tom Brady, Devin McCourty, James White, Matthew Slater, David Andrews and Dont'a Hightower.

Although he will be missing the 2019 season, it looks like Center David Andrews will be very involved from the sidelines, enough to the point that he was voted a captain.

Not too much of a surprise at the list, since this will be Brady's 18th nomination and the 9th time for McCourty and Slater. I was pleasantly surprised about Roberts, so his teammates must feel he has taken on a good leadership role this season. The only player that did not carry over from last years group is Patrick Chung.