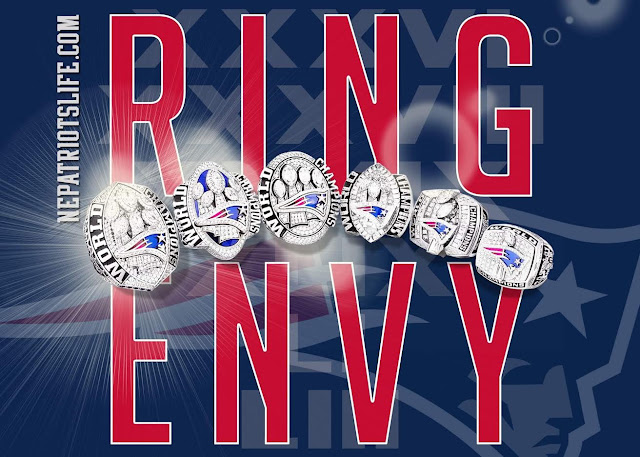 These Ring Envy descriptions are gonna get really repetitive over the next few weeks. Would we have it any other way, though? Hell no. I love watching the Patriots beating up on shitty teams almost as much people love ripping on the final season of Game of Thrones. It's poetic, really. Anyway, here are the cries of the lowly Jets fans, who aside from a few who flexed their drunk muscles early, knew there was zero chance of their team competing on Sunday.

Get ready guys....at 4 pm tomorrow we will be 0-3 and ready to fire Gase. Sad, but true. I'm just preparing myself to be disappointed.

A win today would salvage the season...thats why it won't happen.

I understand it's wrong to wish injury on anyone but with the Patriots is it wrong? This organization has been thumbing its nose at every team in the league for 18 years now.

Remember Kraft in 2001 & his PATRIOTS WAY bullsh*t? "We're all Patriots"

No Bob, we're not. People hated the Yankees because they were winners, it's understandable, but the Patriots have been nothing but cheaters. Bradys ACL in 2008 completely changed the game from that point on. The BRADY RULE was put into affect. Pretty much the Brady rule is you can't touch great QBs in this league. But if your QBs big & mobile, Big Ben, Cam Newton, Andrew Luck, well, have at it. Remember the brush of his face mask in the AFCCG? 15 yards, changed the game. Now we even hear of Refs telling guys to stay off Brady, refs fist bumping him in games.

The ENTIRE NATION outside of New England DESPISES this team with the heat of a thousand Suns. Everything slants downhill for this team. They roll through the playoffs with nary a penalty on their Oline. Brady stands in an 8' pocket delivering passes. You watch Redzone & every other QB is running for his life or getting thrown to the turf. Scarnechia is not just a great Oline coach, he's a magical wizard that can turn Wayne Hunter into Orlando Pace.

This latest Brown debacle, just another in the latest of this evil empires snub of Goodell & the NFLs reputation they falsely hold onto as a league for justice. Hell yea, we'll suspend a guy for smoking a joint, but rape or breaking your kids arm? Nah.

I have nothing but ill will for anyone donning the red white & blue for the Patriots. Every guy that goes down on that team from today through the season will bring a small joker like grin to my face. I don't want anything gruesome, just the usual miss the season, nothing a great surgeon can't fix stuff. I honestly don't think I can stomach a season of this team heading for 16-0 & vying for another Super Bowl.

Its getting old & boring the living sh*t out of me. If there is a Voodoo doctor Saints fan out there please, please start twisting those damn dolls, starting with Brady & Edelman. Enjoy the game everybody.

I'm being serious...Let's just bench Bell today. We need as much tread on that tire as possible for next year.

Good luck to Luke Falk. Don't get killed kid. Make the most of this admittedly shabby and limited opportunity today.

Ive decided that Luke Falk will carry this team to victory with short deadly accurate passes opening up LeVeon for a monster game running and catching passes. Leo Willians will live up to his draft status finally by accidently stepping on Brady’s ankle sending Tom into The TB12 life enhancement bunker for the game.

Glad the 2021 sixth round pick for D Thomas is working out!

Getting ready for an old fashioned azz-kicking. The defense will play tough but I can't see the O doing much against the multiple fronts BB will put up. Hopeully I am wrong but all signs point to a 35-6 Patriots win.

I’ll only stomach one quarter of this train wreck

I don’t miss the wildcat.

Boyitellya, I really missed the wildcat.

Pass protection not awful on the first drive. Baby steps?

That offensive line and the cheaters probably know our plays.

Whoever put this schedule together has a sick sense of humor.

Miami is playing Dallas closer than we are in this game. Go figure.

I guess making a tackle is optional today

I already expected it to be 14-0, to be honest. Minor victory?

Who was the pussbag running away from izzo instead of tackling him??? Cut him immediately

Damn BB not even trying to run. Total disrespect of the Jets secondary.

3rd and 15 Gase calls run up the middle into the teeth of the defense. Great call!!

I wish our receivers got 10 yd cushions...must be nice

I was told the Patriots are having offensive line issues.

a fcking bubble screen on 3rd and 9?

They're gonna cover the spread by the end of the quarter

This is legit embarrassing.

"Riding him down is Jamal Adams the Pro Bowler". Well they had to take a guy from every team I guess.

Roberts making a big deal about defending a dropped pass. Brady goes right back to him to make a point.

Going to be awkward when the Pats 2nd team destroys them in the 2nd half...

Darnold is out right now trying to get the clap.

I'm going to sleep like a baby after this game. Wake up crying every two hours.

3rd and 3 and they throw a pass behind the line of scrimmage. Gase Offensive genius I think not

Jets are celebrating tackling the punt returner down 23-0. I get it was a big hit and you want guys playing with passion but come on.

Patriots are 106-3 in aggregate score this year. That is mind boggling

If Brady did that to me, I would fall right on top of him elbows 1st. That bitchass.

Brady’s coming back in

The ballwashing of the Pats by this idiot Kevin Harloon is pathetic.

The defense and special teams scored TDS today .. our offense has not scored one since Week 1 smh

Where's Joe W. Namath to tell me how stupid we are for passing on Stidham?

one team just cares more. Pats are up big and their special teams is still going all out.