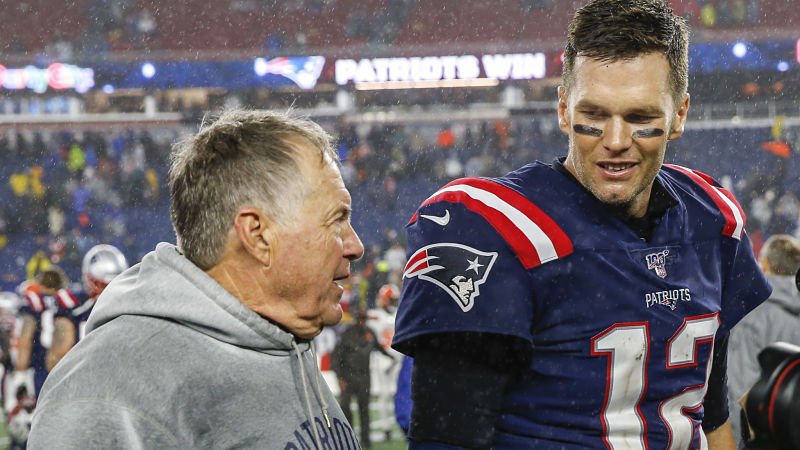 The New England Patriots have been very gifted in the way that winning has become sort of a general expectation. The Pats did go on beat the Browns to advance to 8-0, but there was a different vibe surrounding this one. The reason behind it is that Bill Belichick became the third head coach to reach 300 all time wins in the NFL. This achievement was not taken lightly, as Robert Kraft handed Bill the game ball after the win. Bill also had a comment about his feat during the post-game conference.

"It's a great privilege to coach this team and to coach the guys that I've coached throughout my career," he said. "Fortunately, I didn't play in any of those games. That's a good thing for us, but I've had a lot of good players, a lot of great players and they are the ones that win the games. Had a lot of great assistant coaches on my staff through wins at Cleveland and certainly here. I was a part of those, but honestly players win games in this league and fortunately I coached a lot of great ones."

Bill has always gave almost all of the credit to his players after every win and here's what some of them had to say about their coaches win.

"You know, it's amazing to think that he coached for another place and they didn't think he was good enough, and then he comes here and does a great job," Tom Brady said of his coaches success. "He's had a big influence on me," he continued. "All the things I think he really preaches to us as a player is what we get out of him as a coach. His consistency, dependability, trust, confidence. All those things over a long period of time really adds up. So, he's just a very stable figure when he gets up and speaks to us. It's about trying to win games, and I think we all appreciate that."

Brady has been a significant part of those 300 wins, but there have been a ton of guys that have come in and out of this system to help get the win. Phillip Dorsett for example, has only been here for a few seasons, but has played a big role in the offense as well.

"It's amazing," Dorsett said. "I'm just so blessed a part of it even if it's just a small 2-3 seasons. I'm so grateful to be a part of it and to be coached by him. To be able to be here and say that I played for the New England Patriots during the Bill Belichick era, Tom Brady, I'm living the dream."

Pats are heading to Baltimore for arguably their toughest game yet, so here's hoping for win 301.