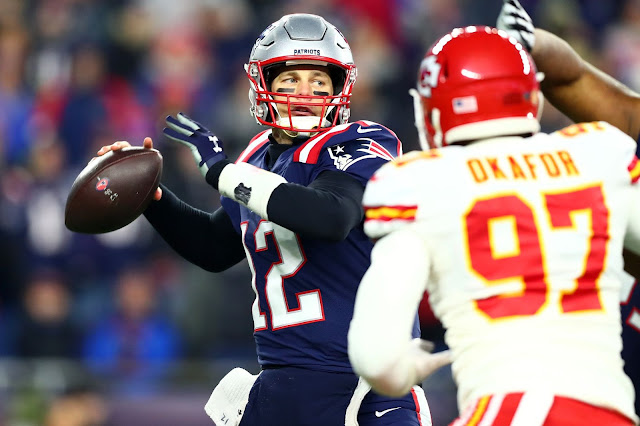 The Patriots played against the Chiefs tonight and lost for the second straight week. Also snapping the 21 game win streak at home. The Patriots took an early 7-0 lead. After being down early, the chiefs made a crucial interception and the Chiefs scored 23 straight points. After the Brady interception, all momentum went to the Chiefs.Down 23-7 with eight minutes left in the third quarter, the Patriots scored 9 points. In a late 4th and 6, Tom Brady ran for 17 yards, but ultimately came up short and couldn't pull out the win.

Pat Mahomes led the Chiefs in passing going 26-40 for 283 yards, one touchdown, and one interception. LeSean McCoy had 11 carries for 39 yards. Travis Kelce also led the Chiefs in receiving with seven receptions for 66 yards.

Overall the Patriots are still having problems on offense. Aside from two trick plays the Patriots struggled to get the ball down the field. By no means, am I also saying that they should bring back Antonio Brown. Let those dreams die. The defense is still playing really well. They had a rough firs half but they also held the Chiefs to three second half points. I'm not one to blame the refs for any loss, however I do believe that there were some major missed calls that costed the Patriots points. Aside from that, the Patriots move into the two seed for the playoffs. The Pats play the Bengals next week so get ready for another nail bitter!