Patriot Under-Performers of the Game (Week 13) 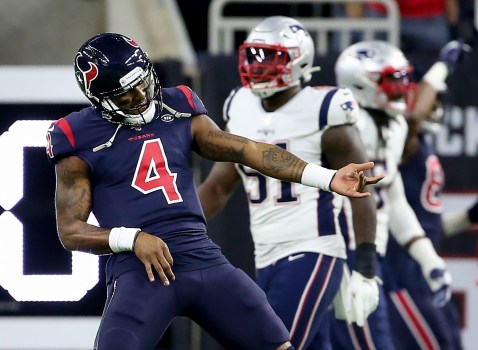 The Patriots fall to the Houston Texans tonight by a score of 28-22.

The score may seem like it was a close battle, but the Pats got lucky on some garbage time drives towards the end of the game.

They showed absolutely no life on offense, but this time the defense couldn't keep them in it, as they were dead for the majority of the game, as well.

Got a little twist on the weekly article here for ya, but let me get one thing clear first.

I get a lot of shit from my roommates and other friends during the games we play bad for getting fired up and yelling at the TV. They act like it's illegal to be upset when you actually lose a game just because you're accustomed to winning.

They say shit like "Oh, you're 10-1 you're fine you guys can afford a loss. Spoiled this, spoiled that, can't lose graciously blah blah blah."

Yes, as a Patriots fan I am accustomed to winning. That's why losing stings even more when it happens. Sorry I'm not going into every game expecting a loss like most of the Jets/Giants fans I go to school with.

This loss did hurt, really badly. It knocked us out of the #1 seed, giving Baltimore home field advantage throughout the playoffs since they have the head to head tie breaker against us. And it also let Buffalo creep up to a game behind us for the division lead. And if we're being honest, I would be very nervous against them in the playoffs. Not as nervous as traveling to Baltimore for an AFC Championship matchup though *anxious laugh*.

So, now I bring you the first edition of the Patriots Under-Performers of the week, and boy were there a lot of them.

Tom Brady
Brady finishes the game with a stat line of 24/47 for 3 TDs and 1 pick. Stat line aside, the main issue I have with Brady here was his attitude. After maybe the third drive of the game, Tom's emotions got the best of them and you could see him seething. He walked to the sideline on multiple occasions and tossed his helmet down carelessly and pretty much looked like he had given up. If anyone else remembers, when the Patriots were getting routed by the Titans last year, Brady did the same thing and threw his helmet away on the sideline and essentially said "I don't care. We lost." I have a real issue with this. When you're the quarterback of the team, you are the leader, everyone follows you. You should know you can't act like that, especially as a 19 year vet in the league. There was plenty of ball game left, but the rest of the team saw that and went on a scoring drought for two whole quarters until garbage time. Just unacceptable.

Mohamed Sanu
Guy has done next to nothing since being traded to New England. Huge fourth down would have been converted if you could just catch the ball man. Right in your damn hands. To think we downgraded from Josh Gordon to him AND had to give up a second round pick. He's been here long enough and hasn't made a difference. This guy was supposed to be the solution to our wide receiver corps. Big nope.

Marcus Cannon
Marcus, buddy, guy. You have one job, it's to block! When you figure out how to do that, let me know, and don't get called for a holding when you do.

Jonathan Jones
Jones is usually really dependable, I'll give him that. But oh my God did he get abused tonight. He was getting targeted over and over by the Texans tonight and their elite receivers ate him up. He got burned for a would be 35 yard touchdown late in the third quarter, but made up for it with a nice play to punch the ball lose before the intended receiver got his third foot in and secured the ball. The play was reviewed and overturned, refs got the call right (for once) and set up for a 3rd and 10. And on the very next play the Texans run the same exact route, Kenny Stills burns Jonathan Jones once again for a touchdown, and this one stood. Figure. It. Out.

Josh McDaniels
Enough of this fucking run, run, pass offense. It is way too predictable. A defense of 11 blind guys could stop us on third down. I'm sick of seeing us rush for anywhere from 0-5 yards on first and second downs and then running some stupid stick or slant play that also goes nowhere and going 3 and out. And that delay of game penalty after our first touchdown?! What in the hell was that? Why purposely take a delay of game penalty when we are on our fourth kicker of the year and have missed numerous extra points? Makes no God damned sense.
This team I've watched the last couple weeks does not look like it has the makings of a 10 win team. And anyone that's not a Pats fan that reads this will say I sound entitled, like I mentioned before.

But it's just the truth, the going got tough and the Patriots have not gotten going. Bailed out by the defense two weeks in a row, but couldn't muscle it out tonight. Definitely one of the worst efforts I've seen from the Patriots in a while.

Thanks for bearing with me. If you've made it this far, I appreciate it.

Pats head back home to Foxboro with an AFC Championship rematch with the Kansas City Chiefs next Sunday. Great.