Bill Belichick wants none of that "through thick and thin" talk 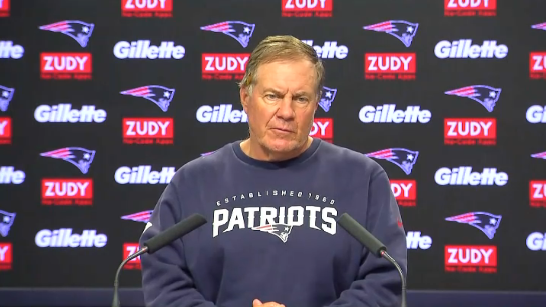 You will hardly ever get anything out of Bill Belichick in a post-game interview, even less so after getting a first round exit in the playoffs. Bill turned down any questions regarding the future of Tom Brady, but did take note of one question regarding the Patriot fans.

When asked if he had a message for the fans who have stuck it out with the Pats "through thick and thin", Belichick made a point to address the "thin" aspect of the dynasty. “We appreciate our fans,” he said. “I wouldn’t say it’s been all that thin around here, personally. Maybe you feel differently, but I haven’t heard too many fans say that. Of course we appreciate our fans. We have a great relationship with them, they’re here for us and we always try to perform our best so they can be proud of the way we perform.”

While many franchises have their ups and downs throughout the years, not many can brag about two decades of dominance. Realistic expectations and some perspective may have been lost over time with the constant success, but this franchise rarely has had much "thin" in regards to the reporters question. I personally don't believe that the reporter really put too much stock in saying through thick and thin, and was just more or less used as a common expression, but Bill is certainly right.

Patriot Nation has been beyond extremely lucky to bear witness to the success that it has, so I must say that I agree with Coach Belichick's answer.