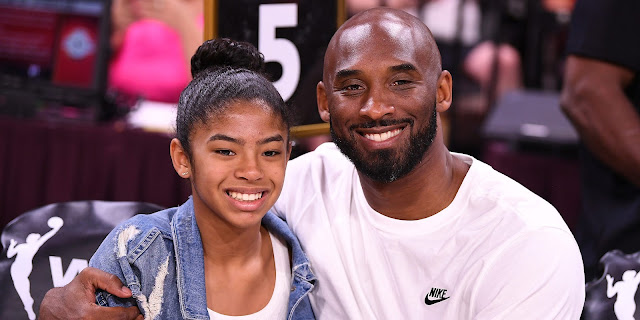 On Sunday, January 26th, it felt like the world stopped spinning. NBA Legend Kobe Bryant had passed away. A few hours later, it was reported that Kobe, his daughter, Gianna, and seven other people were killed in a tragic helicopter crash on their way to a basketball game for Gianna's team. To be honest it doesn't even seem like tragic is the appropriate word to use. As a Celtics fan all of my life, I was never really fond of "the basketball" player, who was Kobe. As a person though, I have always had great admiration for him. He worked the way that everybody strived to work.

Like I said the world stopped spinning. Everyone was talking about it on social media, it was on the news, and people were texting me about it. As I watched the continuous videos and posts about Kobe, it really sunk in. Watching those videos, I was choked up. Even writing this right now is feel like there is a lump in my throat. As a Celtics fan and someone who I constantly denied as a "top player" of all time, How could this possibly drive this much emotion in me and everybody else. Its really simple actually, the world had lost one of the most inspiring and influential people in my lifetime. The world had lost another incredible person. I watched this video on Jimmy Kimmel where he talks about his daughter carrying on his legacy, and it hit me that not only was he a great basketball player but incredible person, an incredible father, an incredible worker, and an incredible mind.

Below are some of the videos that I admired the most after rewatching them the other day.

Kobe telling our pal Jimmy Kimmel about his daughter Gigi carrying on his legacy.

One of the sweetest videos on the internet. pic.twitter.com/xzeDolTdFh
— Chief (@BarstoolChief) January 26, 2020

A bunch of Patriots players took their social media platforms to express their condolences to Kobe, Gianna, and all of the others on the Helicopter, to their families.

Rest In Paradise Kobe, Gigi and to all the others who lost their lives! 😢
— James White (@SweetFeet_White) January 26, 2020

I’m heartbroken. When my grandma and I first moved to the United States, we would tune into every Laker game we could just to watch Kobe. Seeing him play gave us a feeling that can never be replicated. #RIPMamba
— Keal (@NkealHarry15) January 26, 2020

What are some people’s favorite Kobe moments... please share.... 1 of mine has to be Kobe hitting 2 free throws on a torn Achilles to tie the game!! Can’t Imagine the pain he had shootin but he made it look so easy. He inspired generations Pure greatness! #MambaMentality #rip
— Kyle Van Noy (@KVN_03) January 26, 2020

View this post on Instagram
Rest In Peace to Kobe Bryant, One of the Greatest Competitors to ever walk this planet!! It felt like a dream hearing you speak to the team in 2018 and also got to fanboy after, you inspired so many and will never be forgotten! My prayers are with the Bryant family and the family of the others who also passed in the crash. #RIPtoKobeBryant #KobeTheLegend #NeverForgotten #PrayersUp🙏🏽
A post shared by Danny Shelton (@im_mista_lavalava71) on Jan 26, 2020 at 12:28pm PST

What a sad day today. @kobebryant you’re a legend. I remember being in the front row of a Celtics-Lakers game & u came by shouting my name. It put a huge smile on my face- such an honor to be recognized from the greatest. You’ll be missed. Sending my love & prayers to your family pic.twitter.com/LLcDv9VKLT
— Rob Gronkowski (@RobGronkowski) January 26, 2020

This video will bring tears to your eyes. Perfect example of the type of person Kobe was 😓💔 pic.twitter.com/11T2pDeMt6