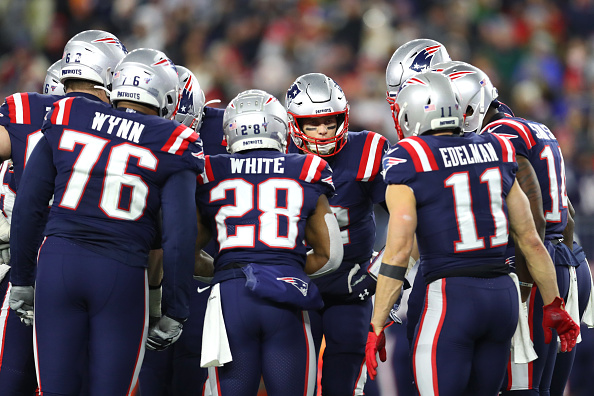 Now that the dust has settled and the 2019 NFL season is officially over, it is time to start looking to 2020 and to what the state of the Patriots offense will be come next year. Let me just get this clear for the purposes of context: for this post, we will just be assuming that Tom Brady re-signs, cause I'm not sure any of what I'm about to say will even be remotely possible if he leaves. Onward.

As of right now, the only two solid locks in the system are Julian Edelman and N'Keal Harry, which I feel are a solid base moving forward. Another player in which I would call almost call a lock but received a lot of flak this year was Mohamed Sanu. I am not ready to give up on Sanu just yet as I feel he has a good future, but the team could clear up roughly $6.5 million if they dumped him, so I have him likely staying but not a lock.

The Patriots went ahead and signed Phillip Dorset last offseaon, and while he showed promise in some areas, I can't imagine he will be returning as he really faded in the second half of the season. That leaves us with undrafted rookies Meyers and Gunner Olszewski, but we'll just have to wait and see how they progress during the offseason programs this year before making any moves.

So now that we have our base moving forward, lets scour the market to see which potential names could be heading to New England shall we? After going through the lists, here are the potential names I could see the Pats having at least some interest in: Hunter Henry, A.J. Green, Emmanuel Sanders, Danny Amendola and Nelson Agholor. Obviously there's a lot going on here and some moving parts need to happen, so let me break this down from a fundamental standpoint.

Simply put: in order to keep Tom Brady here and happy, you have got to give the man weapons. I think one, or a combination of these guys will be enough to keep the man. First on our list is Hunter Henry. The Patriots had some help from Ben Watson, but ultimately the tight end position was non-existent this year, so if the Pats could get a legit offensive guy like Henry to break the doubled up Edelman, the ball could get spread around much more effectively while also giving Tom that safety net he most certainly missed without Gronk this year.

Next on our list is A.J. Green. Green has become more of just a well-known name rather than an all-pro these past couple years as he has struggled to remain healthy, which offers the possibility of a cheaper deal. Green is also starting to get up there in age, so his value could dip much lower than he might be expecting, so he might have to test the market before coming here. However if he sees the possible scenario of catching balls from Brady, it could very well bring back the Green of old. Next we have a familiar name in Emmanuel Sanders, who was one of the names thrown around during the trade deadline. Sanders ended up in San Fran, where he went on to prove he can still be a productive guy, so get him in on a cheaper deal and be an outside threat for a guy who can give him another ring.

These next two guys probably wouldn't set the Pats up for success on their own, but could be low-key cheap deals that end up working out. Danny Amendola could potentially be gearing up for a reunion with New England, as he produced a couple good seasons with Detroit and Miami, both of which paid him enough where he might be willing to take a soft deal to suit back up for another run. Finally, we get to one that might get some controversy in Nelson Agholor. I know, all the man does is drop balls that hit him right in the hands, but hear me out: he has shown decent production, at least enough where I consider him a good under the radar get. After such a tough season, the Pats could swoop in and get him cheap as he is trying to prove himself with a bounce back season to get a better deal.

So there you have it, a semi-educated breakdown of some of the moves I think the Pats could go, and although they will likely do nothing I've said, it's always good to dream. If there are any other names you think would be a great fit, let your boy hear it down below.