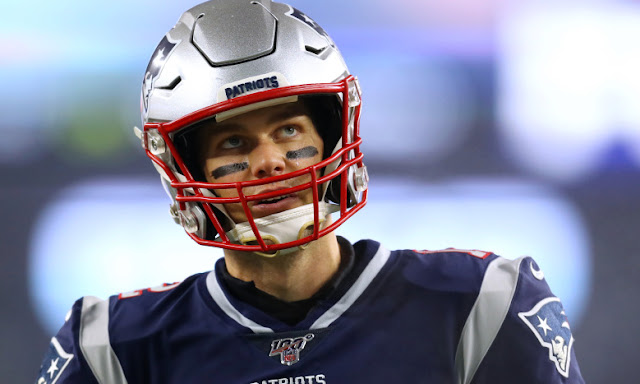 Henry McKenna/ For The Win

For the first time in Tom Brady's 20-year tenure in New England he is slated to become a free agent. Since the Patriots loss to the Titans in the wild card game everybody has been losing their minds over whether Brady will sign with another team or not. In an interview with Westwood sports, Brady spoke about his future in the sport.

"I'm open-minded about the process," Brady said in his weekly interview with Westwood One radio, when also asked whether he'd be willing to play elsewhere. "At the same time, I love playing football and I want to continue to play and do a great job. I'm looking forward to what's ahead. Whatever the future may bring, I'll embrace it with open arms."

Can we pump the brakes for a second? He said he was "open-minded." That means absolutely nothing! It means about as much as him supposedly having his Connecticut house on the open market. Nothing! Me personally, I don't believe he will play for another team, but I am certainly bracing myself for that option. Now if Brady playing for another team starts to look like more of a reality, as Patriots' fans we are in quite the predicament, aren't we?. How can I be mad at a player who has one six Super Bowls for my favorite team? Someone who has made football so enjoyable since I can remember watching the sport. Also as the Patriots organization, how can you not "ride the wheels" off of Tom Brady. I'll say it again he won SIX Super Bowls. Pay the man his money. He's accepted so many player friendly deals for this organizations success.

As much as it pains me to say as well, I don't really think that Tom Brady gives a crap either. He's proven himself to the Patriots, he's had his fair share of wins, what else does he need to do? If he wants to make 10-15 million dollars a year, as selfish as it seems, and even though you could make an argument against that, you can't be mad at him for leaving. However, I will say if I have to watch Tom Brady win his seventh Super Bowl for another team, I'll stab my self in eyes, that would be more enjoyable to me.

Lastly, The first person to burn a Patriots Brady jersey should be stoned or burned at the stake. Seems like a fair punishment to me. You know some random idiot will do that. Just get ready.