X's and O's: Patriots vs Titans 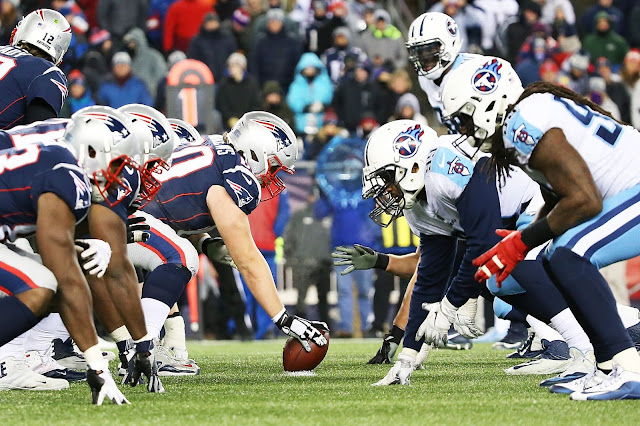 The Patriots play their first Wild Card since 2009 and the Patriots have never won a Super Bowl without a first round bye. Which I'm sure you've heard about a million times this week. The Patriots definitely struggled last week against the Dolphins but I have no idea what I'm gonna see from the Pats tonight.

The Titans play a 3-4 front with a man to man secondary scheme. Since the Titans play a man to man defense, establishing a run game will be crucial. The Patriots will want to give them different sets at the line of scrimmage. Line up with a running back in the backfield, as a wideout, or put him in the slot. For example, the Patriots could run a play where James White is lined up out wide, Edelman in in the slot, and Dorsett is on the other side of the field. From that point White could run a vertical route, Edelman could run an out route, and Dorsett could run a vertical as well to clear out the CB and safety.

The Titans have hit a recent surge since making Ryan Tannehill their starting quarterback. They have been a top offense in the league. The Patriots again will want to come out in a lot of different looks. The Patriots will want to confuse Tannehill and make him have to make decisions. Derrick Henry will need to be contained, with all players attacking the ball when he is running. Henry is good downhill runner. The Patriots need to contain and force him to the middle of the field.

I think that the Pats could come out and have a nice win, and I could see the Patriots also laying a huge egg. Its just how the season has gone so far. I really hope this isn't the last Pats game this year. I really don't think it will be though. I have the Pats winning today 27-16. Stephon Gilmore, specifically, but also the rest of the defense got torched last week. When the bye was on the line, the Dolphins marched down the field and scored with ease. I look for the defense to have an incredible game tonight to redeem themselves.