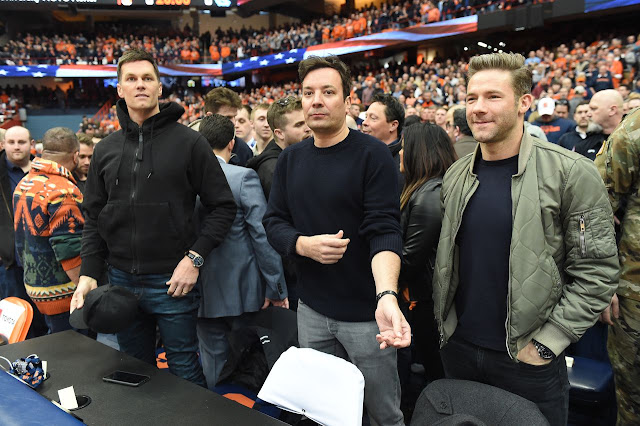 Over the weekend Tom Brady, Julian Edelman, and Jimmy Fallon were seen at the Syracuse Orange and University of North Carolina men's basketball game. Obviously with Brady and Edelman being together the Bradys rumors started spiraling. Julian Edelman didn't really help the cause either.

During the game Edelman was on camera with Brady. Edelman said into the mic "He's coming back" multiple times. Initially Brady played it off and was smiling. After a few seconds Brady became serious and said something that wasn't caught on mic. Depending on what narrative you want to believe in you could either read his lips to say "no, I'm not" or "This guy." Like I said, depending on what narrative therefore Im going to take the comment "this guy." I'll let you decide.

To be honest at this point I'm exhausted over the Brady saga. I just wanna see what happens and move on from it. Give me a decision and let me deal with it. Maybe I'll want to jump off a cliff or maybe I'll celebrate and get ready for a seventh ring. Now there are rumors (at best) that Jimmy G could end up back in Foxboro or possibly Andy Dalton. Maybe it will be Derrick Carr. The point is everyone on the planet is "capable" to take the throne from Brady. Im not sure but the suspense is tiring. Just wrap it up. Please.