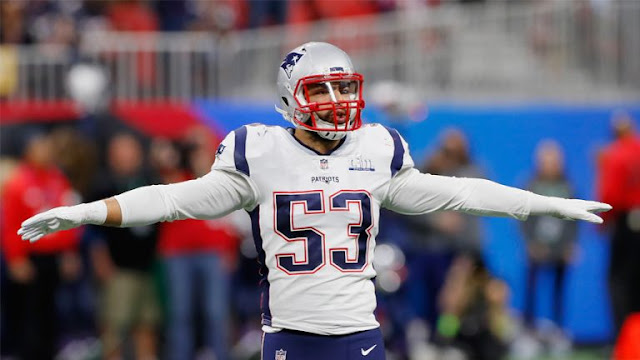 
Kyle Van Noy has been a crucial piece in the Patriots defense in the last few years. He's been one of my favorite players to watch and now he is a free agent. While Van Noy has made it clear that he would love to remain as a player for the Patriots, he has also claimed that he won't wait around for them to make an offer. Van Noy also talked about wanting to be valued.

“It is interesting, but I’m going to be honest, I want to be a priority for a team and I feel I have to go where someone is going to make me a priority,” Van Noy said. “I’m sure New England knows that. If that opportunity comes, it comes. I’ll be frank, I don’t see myself waiting around. I’m pretty sure those guys aren’t going to wait around either. They’re really good at their craft. They’re at the top of the league at their position so it’ll be interesting.”

Van Noy's stats on the Patriots have speaks for itself. In his four-year span in New England he has posted five forced fumbles, four fumble recoveries, 16.5 sacks, and 151 tackles. Not to mention the aspects of the sport that isn't stat related.

This feels like a classic Patriots story. A guy who has been very productive wants to hit the open market. Maybe its for more money maybe it's not. I don't know. He probably would get more money from another team too. Deion Branch is the first name that comes to mind. He'll probably play for another team, make more money, and likely miss any chances of playoff football. Thats always how it goes, doesn't it? In his case I hope he finds a good team to play for but history certainly isn't on his side.