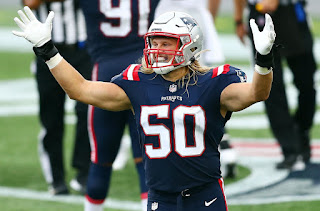 (Adam Glanzman/Getty Images)
Winovich was one of Sunday's top players. His highlight moment came when he sacked quarterback Derek Carr and also slapped the football out of his possession, causing a turnover and giving the New England Patriots the ball.
Winovich said he saw the play coming. "Literally last night I had a dream that I had a strip sack." He stated.
“So before I went out on the field for that series I told one of the team doctors, I told him I had a vision last night, I had a dream that I was going to get a strip sack and two plays in I did," Chase went on to say.
Here's to hoping Chase can dream of a lot more sacks and fumbles throughout the season.