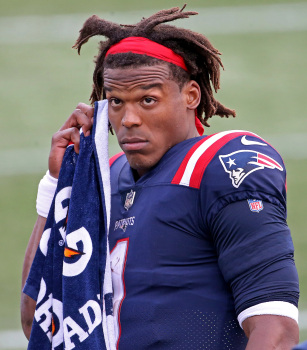 Matt Stone/ MediaNews Group/Boston Herald Cam Newton has tested positive for Corona VIrus and will not play for against the chiefs tomorrow. THe news was first reported by Field Yates and Adam Schefter from ESPN, the news has been confirmed. Being one day away from the game, that begs the question who is going to be the Patriots starter?

Patriots have been doing mass testing and re-testing and, so far, there is no spread, per source. https://t.co/0XyCkixjgv

THe Patriots are weighing their options but it seems as if it will be Bryan Hoyer or Jared Stidham. Stidham was the preseason favorite to take over as the Pats new quarterback before Cam showed up. Stidham also suffered an injury going into the season. Fans on twitter are calling for the game to be postponed, but I dont see that happening unless the Patriots have a few more postive tests. ALthough the Patriots are playing the golden child of the NFL right now, so I wouldnt be surprised. This really freaking sucks. I loved the Pats chance to win this week. THe Patriots always have the chiefs number and this was the week to call it. Going forward it begs the question, How long will the NFL sustain all of these postive tests? When will Super Cam be back? What will the Patriots season look like going forward? All I know is until I have answers you can catch me like this.

Patriots have been doing mass testing and re-testing and, so far, there is no spread, per source. https://t.co/0XyCkixjgv