Patriot Performers of the Game (Week 1) 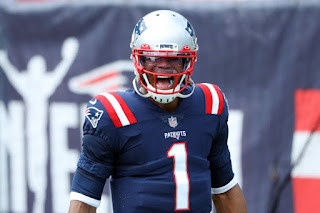 (Maddie Meyer/Getty Images)
And we're back. In a year with what seemed like an eternity without sports, we are finally back. And let's hope we are here to stay.
The new look New England Patriots busted onto the scene, led by quarterback and captain Cam Newton, and came away with a solid victory over the Miami Dolphins 21-11.
And who else better to start the first recap off with than the man himself? The present and future of the franchise, Cam Newton.
Cam finished the game with 155 passing yards, 75 yards rushing, and 2 rushing touchdowns.
I can't be the only one who was so stunned seeing the Patriots offense operate in such a different manner. I loved every second of it. 21 years of watching this team and it only took one game to see more quarterback runs than I had in my entire life. I can definitely get used to that.
Stephon Gilmore picked up right where he left off. The reigning Defensive Player of the Year came away with the first interception of the season. Adrian Phillips and J.C. Jackson followed suit with one apiece as well. Phillips also led the defense in total tackles with 9.
Punters deserve love too. Jake Bailey has always been a sleeper in the Patriots success. He always gives the defense any upper hand by pinning opposing offenses deep in their own territory. He had 3 punts inside the 20 and 1 of them inside the 10 yard line.
The Patriots travel west coast for a Sunday night matchup against a very tough and talented Seattle Seahawks team.
Twitter and Instagram @NickRufo21