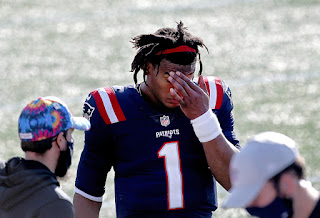 (Nancy Lane/Media News Group/Boston Herald)
Quarterback Cam Newton was benched for inefficiency yesterday against the San Francisco Forty Niners and substituted by second year Jarrett Stidham.
Newton finished the day with an abysmal line of 9/15 for 98 yards and 3 interceptions. He was ineffective on the ground as well, only rushing for 19 yards on 5 attempts.
This easily has to be Cam's worst game of his career, and probably the Patriots worst loss all century. It doesn't make sense to me how Cam and the Pats came out of the gate so hot, came down to one play and almost beat the Super Bowl contending Seahawks, and then from there have just crash landed. Two back to back absolute brutal losses.
After the game, coach Belichick said that the poor play did not cost Cam his job, stating "Absolutely. Just wanted to give Stid a little experience."
Well thank God. I was high on Stidham for a while. But what I have seen from him now, we'd be doomed if he was our starter. In his career he is 13/27 with 1 touchdown pass to 4 interceptions.
Cam is gonna march to the beat of his own drum come this offseason. This was a prove it year for himself and the rest of the league. If he can secure the bag and lock up a long term contract elsewhere, he's going to. And I am not confident whatsoever in Jarrett Stidham being the future, which is completely opposite of how I felt in the summer.
The Patriots contend with division rival Buffalo Bills next Sunday. A loss could lock the division up for Buffalo if we're being honest. If the Pats are serious about this Cam experiment and contending this year, they won't let him walk out the door, and they'll go get him a receiver at the deadline and surround him with weapons, unlike they did Brady.
Twitter and Instagram @NickRufo21