Patriot Performers of the Game (Week 4) 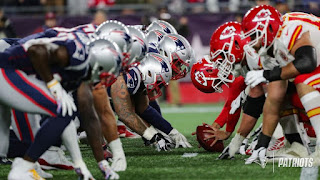 (Eric J. Adler/New England Patriots)
After a disastrous and up and down week, the Patriots and Chiefs squared off on Monday night, and the Patriots fell 26-10.
The narrative coming into this game, with Patriots starting quarterback Cam Newton absent from being diagnosed with coronavirus, was that the defending Super Bowl Champion Chiefs were going to steamroll them.
Well, it turned out the Patriots ended up beating themselves more than the Chiefs did. Oh, and the Chiefs had a little help from their black and white striped friends.
Early in the game, the Pats defensive line forced a sack, and then what seemed to happen was that Mahomes fumbled the ball into Shilique Calhoun's hands, and the ruling should have been an interception. But the refs made an absolute horrendous call and said Mahomes was down way prior.. Not the first time we have seen KC refs ripp the Pats off in recent history.
Aside from the handful of missed calls, the Pats really screwed themselves. Hoyer was a train wreck with multiple turnovers and zero awareness. and Edelman missed bobbled the easiest catch into a defenders hands for a KC pick six.
All bad plays behind, I guess there were some highlights that are worth talking about.
Running back Damien Harris played in his first full game ever after only getting 4 rushing attempts all last year. He took 17 carries for 100 yards and could be a valuable piece for the Patriots moving forward.
N'Keal Harry made a spectacular diving catch in the back of the endzone and gave the Pats some life late.
And all in all the defense was lockdown all night. To only allow 6 total points at halftime to such an elite opponent was incredible. if it wasn't for the defense this game would have been real ugly.
Pats travel back home for a meeting with Denver next Sunday. Let's hope they're all healthy.
Twitter and Instagram @NickRufo21